5.  The true nature of Wokery and the damage it does

... to work and social infrastructure.  Hat tip to Rossa's mother.  This will also go up at OoL and at Gab.  RM writes:

Got this from a Vox post, it really defies understanding in some ways, apart from the fact that we already know about this sort of thing after years of reading various blogs, yours included, but still it's completely off the scale, but then it is America, although perhaps it could still happen over here as well!!

Dear RM, far from defying understanding, it's precisely what we've been posting for some years now at this site and others - quite understandable and dismaying at the same time. It is true from all sources I have and no doubt from others - for a start, look at his own comments thread:

For those who cannot access this, pity, because it's pretty vital to apprise yourself about.  I'll include a small excerpt below, plus some comments at random, but there's vastly more: 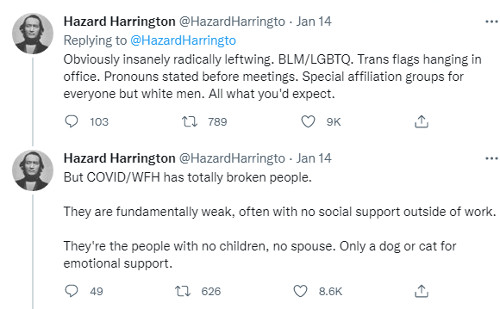 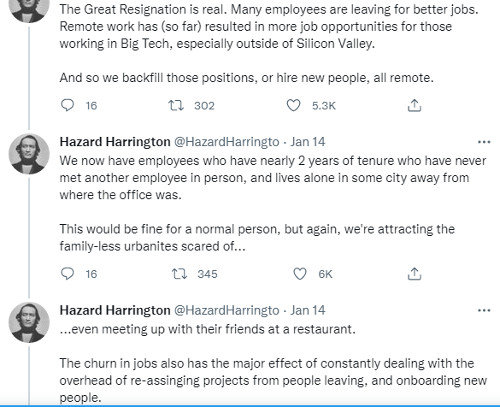 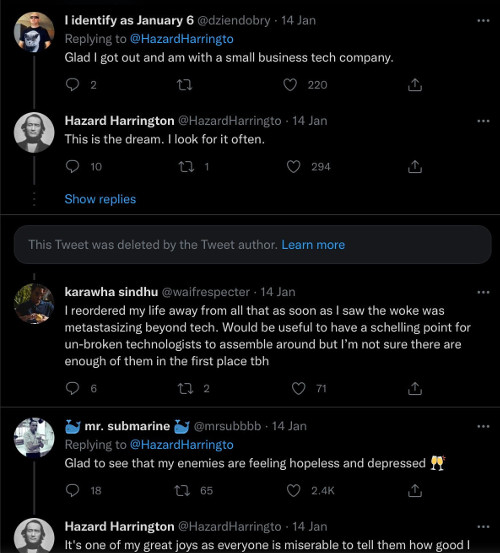 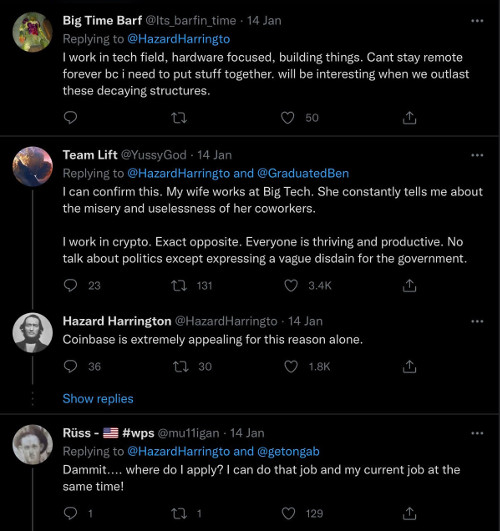 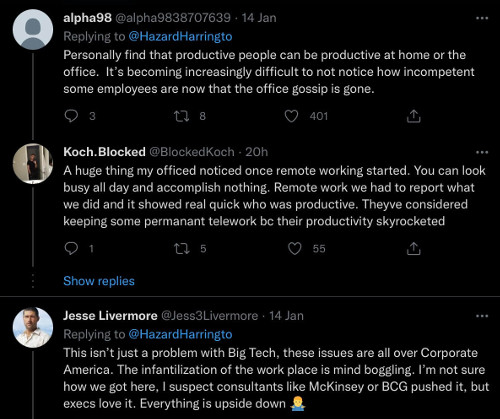 One last one coming through:
#  My nephew lives near Seattle and worked for Microsoft and I sent it to him last night and his reply was "yup they are all like that"........What a lot of snowflakes!!
Oh, one more:
https://voxday.net/2022/01/14/covid-and-corporate-cancer/
What to make of it all?
Well I need to say, first up, that even when my posts were being taken down some time back, it was done in a not hostile tone, it was almost friendly on the part of the karen as I'm a longtime customer and use ggl for everything.
Which is why my own reaction was restrained.  And still is.  Nevertheless, it must be obvious that companies cannot survive like this and certain demographics are perhaps [cough] not best suited to setting the atmosphere of the workplace - see N.O. item Fri 14.
Political purpose?
Well let's just say that there was an enemy of a western country - yes, I know, no country has any enemies, it's all nirvana, peace and love and green billions of dollars.  But let's just pretend that there was a WW1 and WW2, Korea etc. and that certain monolithic enemies wanted to nobble a nation.  How would they go about it?
https://youtu.be/IQPsKvG6WMI
It's a quite logical and simple recipe, though involving the resources of an entire planet and owning all the key posts in society, from the military brass to plod, to hospital admins, to judges, teaching heads of depts, it goes on and on - over decades, you demoralise an entire generation and the one after it and it matters not that you've failed to entirely demoralise older generations, though they are susceptible, e.g. in the culture, songs etc.
Near the end of the process, once you have the Brave New Generation in place who detest the old and want them dead, they will help them die off in hospital:
https://youtu.be/90WD_ats6eE
And of course, as you realise, after watching that, that they tried this overthrow thing and cold, psychopathic hatred for the elders with us as the brave new young people but it failed because we were children of a largely lip service yet Christian west and there were certain eternal values which made the takeover unviable.
Not so today - today, the godless young are ripe for the taking, all that needs doing is bumping off the old and resistant to change, via, say, a plandemic and poisons administered into musculature and there are your reduced rump of New Plebs under politburo control, itself under diabolical control.
There it is.  It involves a fattened up underbelly of a once great west which can then be ripped apart by the enemy, a bit like the vandals with Rome.
Inflicted on you by James Higham on Saturday, January 15, 2022