4.  Radical
a.  Online first definition of that word is:

(Especially of change or action) relating to or affecting the fundamental nature of something; far-reaching or thorough.

The bit in parentheses is the key today, in that we do not want change to some Great Reset, some brave new world but rather a return to radical values and agreements, rule of law etc.  We need action on this.
b.  This apparently happened not long ago: 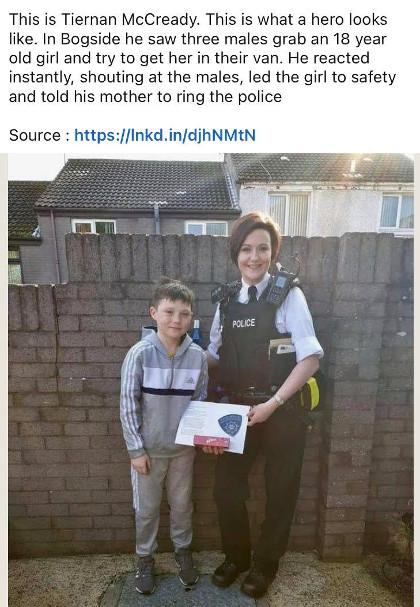 The language choice there is interesting - hankering after a hero, maybe even a messiah, which many felt/feel the Donald is.  So here's a kid who knew something which was wrong and he saved a girl much older than him.
c.  Question - was she worth saving?
It's a valid question which two youtubes recommended by YT hours ago grappled with, with varying degrees of success IMHO.
The first was a MGTOW type, yet lacked the out-and-out hostility to wimmin, interesting, plus the guy made some good points but the example was just so far out there, so OTT that it hardly counted. It was a letter he'd received and in it, some man had married his childhood sweetheart and even before he had, there were signs in her she was going to do this. "This", in this case, was her fully using all the social media now available to "hook up" with dozens of men and I'm not even going to start down that path - OnlyFans, Snapchat, Tinder etc.
Key issue is why he allowed it to even start when his gut instinct told him it was not ok what was happening.  Now you could call that guy a loser if you like, not a man, someone no one would respect but there's a point the vlogger did not bring up but I shall if the next YT doesn't.
All right, the second does and does not cover it but someone in comments did. It was about "pedestals", as in putting someone on one, something I've been accused of before.  However, someone in comments pointed out that men "brought up right" with a strong, non-violent male at the head of the family - and I'd say Tiernan above is in one of those - plus a set of Christendom-sourced values which favour chivalry as a default position for men - that person in comments said it was not being a "loser" to trust a woman, it's an agreement, so he thinks, until she proves herself a taker, quite untrustworthy.
On the other hand, the redhead with the backpack he interviewed in the street who said she does not "allow a man to put her on a pedestal" - apart from being alone and travelling alone with her backpack, plus the vlogger, missed the point that we do not see the woman we pair off with as ordinary like ourselves and into this, I'll post his chart on "pedestalisation": 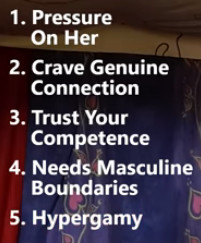 First is about her constantly being unable to live up to his chivalric ideals about wimmin, second was what she really wants - a warts and all acceptance of the other in real terms, both ways, third and fourth explain themselves - he mentions here the "chaotic female" as the default female nature, interesting.
The hypergamy was an interesting point - put a woman on a pedestal as a queen and she'll treat him like a serf but it cuts both ways.  If she puts him on a pedestal, then the temptation is huge to treat her mean, to take advantage of her love. Women always look onwards and upwards and if you pedestalise her, you are saying she's above you, therefore she does not see you, therefore she looks about.
The obvious solution is near the middle - a bit of chivalry according to the Judaeo-Christian as they say, also a bit of reality as to the true nature of woman, finding a natural level where he sees but does not mention her foibles [gentleman?] and places her in a "slightly idealistic" place, one she could achieve if she wanted.
And I'd say the vice-versa is true too.  No quite unrealistic demands and ideals upon him, such that if he fails to meet them all, he's a loser, but rather, a bit like a good teacher - pitching slightly above his level but not too far, such that he aspires to achieve and does achieve many of them.
What I disliked about that redhead was the "trailer park" set of values, the idea that what she was doing was fine, living with zero nobility whatever.  Unfortunately, that's the default position for the female today and everything is geared to maintaining feet of clay and saying it's all fine.  At least in the mating and dating game.
As for him, best expectation is "you reap what you sow", worst is that he'll be cuckolded and robbed blind.  Noblewoman?  If she can pitch certain minimum standards slightly above him, then he can do the same with her.  Rather than "take me as you find", I'd say it's more "take me at or close to my best".  And if she won't budge in applying that to herself, then move on.
Those things apply, of course, to two reasonable people, brought up [fairly] right. But that's not the twisted society we see out there now, and its truly debased values - I'm glad I'm no longer in the dating and mating game because the chances are slim of any longterm success.  So sorry for the under 40s.
Inflicted on you by James Higham on Sunday, April 18, 2021