This is about a major protagonist who’s been developing, one of four, this one a la Pygmalion, to follow on from Nikki [in the long book], she's already dominated Trust [first novella] but in a self-effacing way.

This is the original Jenny from Trust

This is a song related to her

These actresses below [and one ordinary gal] all have elements of her in face and body, in appearance, not necessarily in intellect and accomplishment: 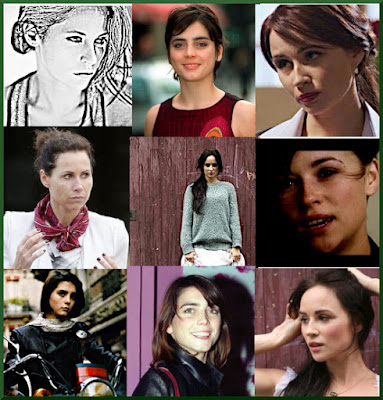 The actresses, by the way, were Minnie Driver, Liza Walker, Emma Jane Pierson and the one in the sketch has been wih me for so long, I forget who she was - two decades ago.

As a character in the stories, she dominates in the way any trad-gal does - forever doubting her abilities and effect, just as Joan Fontaine did in Rebecca but not in the least as Olivia de Havilland does this coming Wednesday, nor Angelina Jolie, nor Gal Gadot - there is no way known she is a kick-butt feminist, nor is she the demure ingenue - she's just a normal human with all the foibles, just as we are.

She's had a tough education in the school of hard knocks, yet has managed to retain her virginity until she was married, is employed by the govt, and by other elements, for things of an unsavoury nature, a la James Bond, minus the sexual aspect.  She [cough] also happens to be a bringer of retribution.

As she always says, "People don't like me." What that really means is horses' backsides don't like her or people at the end of the pistol with suppressor, good people accept that she is what she is.

She has that unerring predatory stare, does her homework on any target, hardly smiles but when she does smile, well that's not her main forte - she's nearly-pretty, less so than those in the collage, boobage in the A to B cup range, fairly straight body, not voluptuous, she's far more biker gal, wears a lot of black, is barely made up, is moving into her 30s and that brings in the killer question.

Almost every heroine today is a know-it-all, kick-butt, I can do anything supergal but Jenny's not, no way.

All her skill is what the Good Lord provided, such as it is, it’s her own practising, her homework, she's ultra-sensitive to everything and everyone around, she notes and internalises. She must have her man who is only for her but also enjoys the company of other males, not to sleep around with but just for banter and bonhomie - what's wrong with that?  She admires the admirable, with a soft spot for the chivalrous.  She uses men to fill the gaps in her own abilities, just as they learn to do the same in reverse.

They don't work as a pair when targetting some baddy - she has a besty who was once her twin sister until the twin died in the last book Trust but it’s now someone on the same wavelength, a new gal, possibly she'll be called Jodi, Jenny’s guy coordinates and distracts, then comes in at critical times to blast the baddies still alive. His business ventures are mainly online, he has a strong work ethic, has the gals' back.

The four work as a team.  Yes, there's a fourth, an alpha-gamma, who is the visible side of what they do, he draws the heat, he and Jodi are an item, which removes the sexual tension and allows it to be about targetting the covid-nazi cabal and its henchmen and women.

As mentioned in a previous post, the plot possibilities of covid masks and a ninja life are superb - there's so much room to move in this novella, itching to get going.

Inflicted on you by James Higham on Sunday, February 28, 2021