[infantile] the new watchword for governments 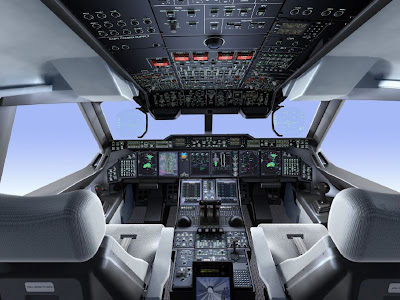 This is a fabulous pic of the cockpit of an Airbus. Click the pic to get the big layout.
Here they go again, governments.

I don't know anything about the Australian political scene nor who this Minister is but his rhetoric sounds quite familiar:

Mr Albanese [Labor Government] used question time to blast the [Conservative] Opposition and the pilots' union for opposing a regulation that would restrict cockpit access to authorised personnel and make pilots responsible for breaches. In a stinging broadside, Mr Albanese said governments and not the pilots' union should determine aviation safety.

The Transport Minister said it was ''completely unsatisfactory'' to have pilots regulating who could enter the cockpit. ''I am of the view that the government, not the pilots on the plane, should decide regulation on aviation security and safety,'' Mr Albanese told Parliament yesterday.

''That is my view and that is the view of the airlines - it is completely unsatisfactory for such an important measure in such a vital security regime to rely on industry self-regulation.'' Mr Albanese tried to ratchet up pressure on the Opposition and crossbench senators by raising a plane hijacking incident in Mexico this week.

The defeat of the regulations followed a strong lobbying effort by the politically influential pilots' association, which was concerned that its members could be held responsible for inadvertent breaches. But the Opposition said it defeated the regulations because they were too draconian and would have imposed unacceptable liability on pilots.

"Making a pilot criminally liable if a door is inadvertently left open by a flight attendant, even if the pilot is trying to land a plane or deal with a crisis, is bizarre in the extreme," said Opposition transport spokesman Warren Truss. "Regulations should not turn pilots into flying doormen and force them into spending more time checking that the cockpit door is closed than flying the plane."

Well, he's right of course but I wouldn't trust the Opposition's motivation either. The pilots' motivation is equally clear. Is the Labor Government really interested in stopping terrorists or, as stated, in more draconian regulation to drag all aspects of society into an overregulated, bureaucratic dystopia as in Britain, one of the more repressive regimes in the world, possibly after Italy?

I find all that more than interesting.
Inflicted on you by James Higham on Saturday, September 12, 2009