Friday [16 till close of play] 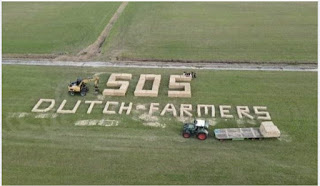 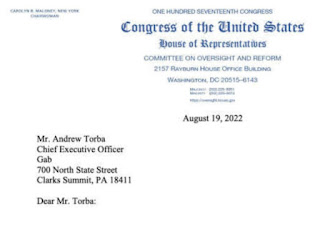 Today Gab received this letter from Congress. We weren’t going to publicize it, but given that the Committee went to the press before we did there’s no point pretending that we didn’t get it.

We are considering our response to the House Oversight Committee.

Please know that we cooperate with law enforcement regularly on public safety matters and we never comment on non-public communications with law enforcement, even when it would be convenient to do so for public relations purposes, such as today or in any response to Congress we may choose to send at a later date.

We will add one thing for the public and the media to chew on in the meantime, given that the relevant case is now public. The House’s letter makes reference to a Gab user who posted threats against law enforcement on our platform. The implication of the letter is that we are somehow complicit in those threats. The posts in question were made on or about August 11th and an arrest was made on August 15th.

In that case, as the now-public affidavit supporting the arrest warrant states, we received an emergency data request for the subject through our law enforcement disclosure portal at 6:10 PM on August 11th. We responded at 6:10 (i.e., within one minute) to inform the FBI the issue was being actioned. Responsive records were provided to the FBI by 8:20 PM, or 130 minutes later.

We know for a fact that this is orders of magnitude faster responding to law enforcement than companies like Twitter and Facebook, on whose platforms far more threats against law enforcement – and far more hate, pornography, and other unpleasantness – can be found. Just yesterday for example a man was arrested and found with “buckets of human organs and skin” which he purchased on Facebook.

We don’t scream about how seriously we take public safety. We don’t publicize it. We don’t use it to make political statements. We just do the work, try to be as responsible a corporate citizen as we can, and provide all lawful assistance to law enforcement as efficiently as we can given that Gab is a small business with limited resources. We like to think we do a good job at this.

[Andrew, it's a triple whammy in your case.  First, the old free speech chestnut itself which if taken to ridiculous lengths allows that sort of troll on and he directly involves oversight committees itching to get you.  Second, you are overtly Christian so even many MAGAs will go for you to shut you down.  Thirdly, the old stumble-upon danger ... someone could well stumble upon direct evidence one day.  Were we to stumble upon anything directly here, frying a baddy, I'd put it somewhere else and leave a trail of cryptic clues. Make no mistake though ... they want Trump, they want you.]
18.  SteveWar Room snippets..Edward Dowd Discusses 20 per cent Increase In Excess Deaths In Working Age Adults After Vaccine Mandateshttps://rumble.com/v1ghzip-edward-dowd-discusses-20-increase-in-excess-deaths-in-working-age-adults-af.htmlJoe Allen On Body Mutilation Surgery Performed On Children: We Are Not A Sane Societyhttps://rumble.com/v1gi0e3-joe-allen-on-body-mutilation-surgery-performed-on-children-we-are-not-a-san.htmlBoris Epshteyn: President Donald J. Trump Demands the Full Affidavits Released without Redactionshttps://rumble.com/v1gi0vf-boris-epshteyn-president-donald-j.-trump-demands-the-full-affidavits-releas.htmlDr Gorka Explains Operation Crossfire Hurricane and Why the FBI Stole Documents from Mar-a-Lagohttps://rumble.com/v1gi0uv-dr.-gorka-explains-operation-crossfire-hurricane-and-why-the-fbi-stole-docu.html
17.  IYE

Summat up with gargoyle? Page v slow in loading. Gab was doing that this a.m. too.

"THE CREATION OF THE CENTRAL BANKS

The power of the Rothschild family begins and ends with central banks. From 1800 until present day, they have created over 153 central banks around the world. This thread shows how they did it."

16.  Toodles mentions a film
... with Breitbart and Lawrence Fox.  Tried to load this twice just now and earlier and all sorts of error messages came up.  I was explaining that BB is rubbish now under Shapiro ... controlled opposition.  As for Lawrence Fox, very iffy, strange ideas not fully whatever we are, not sure we have a label.  Wary?
Inflicted on you by James Higham on Friday, August 19, 2022