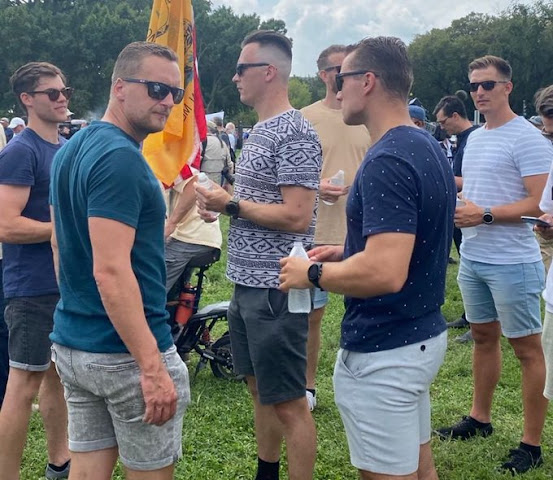 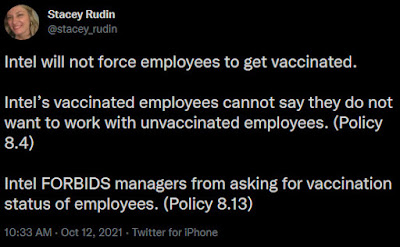 But is it still good after this?

Antibodies?  Wot dey mean?
7.  Sweet
https://www.samizdata.net/2021/10/laughing-apart/
Three weeks ago Saturday, the FBI were out in undercover force at the ‘JusticeForJan6th’ rally – and looking lonely, since everyone from Trump to the proud boys had worked out it was a false flag operation.
6. Toby Young
Make what you will of this:
https://dailysceptic.org/2021/10/12/house-of-commons-covid-report-gets-some-things-right-most-things-wrong/
Still think he's blogging from within his M25 bubble.
5.  Toodles
[Not completely sure which half of the blog this is meant to go to and as Toodles is asleep over there, I'll need to make an educated guess, it seems to be on yesterday's male-female split Them is trying to bring about:]
As I wrote about the trash and absurdity of it all Them on High tossing out dablooms to us the wee urchins, I am reminded that it is not Man vs Woman and all the hogwash we are actually giving a legitamit listen to...to the little spoiled brats who clamour on and on.
It is that age-ole device to divert our attention and boy does it work. I mean society is wrestling with itself like pitbulls turned on each other. Stoked as you might say. And Them laugh and laugh.
Also women who think they are making a bit of dam_ ed difference are delusional ... all the way.
Them allow those dumb dumbs to do as they have been doing. If Them is a man then there you go. If woman there you go. Same thing if Them is both but really who cares?
These women who rail on and on as if...really ...as if they make a difference is sobbing sad to me. Right now the difference is only being allowed, I stress allowed,  and pushed by Them.
I mean who is deciding what day it is we celebrate internationally any ole way?
I can come up with my own day!
So taking a breath and realising we do what we are supposed to do by carrying the Light.  I can breathe a lot easier and even smile when I remember.
[Quite agree - both men and women have to come down off the high horses and just get real, not try to take one another down, not try to take the other to the cleaners, just bleedin' well get along as Dearieme and his missus seem to do.  If Dearieme is a crusty ole beggar and a caution at times with us in the arena, then just makes him a good provider and protector in my eyes, for his good lady and she the other way around.  That's how it is and stuff anyone trying to indoctrinate otherwise.
Now, where one particular group, e.g. feminazis, are ideologically committed to wrecking what is already, historically, a fraught task, i.e. man-woman, in other words shoving a crowbar into a fissure and twisting it, then it is up to people like Toodles, Christie O Misty and I to block them in their endeavours.  Plus anyone else trying to help us.]
4.  DAD reports
A report by the Odessa Accountability Project claims that a 17-year-old COVID patient suffering from breathing difficulties entered a hospital in Texas, only for staff to place a plastic bag over her head after she removed her face mask.
https://summit.news/2021/10/12/dehumanized-covid-patient-in-texas-hospital-had-plastic-bag-placed-over-her-head/
3.  Rossa's mother reports on Vox reporting on ... etc.
https://voxday.net/2021/10/12/mailvox-dying-suddenly/

An electrician reports that an alarmingly high number of the members of his union are dying, more than 4x the annual average.

Reading what you posted about a pilot dying in flight and many other coincidences brought to mind the seemingly high number of general & corporate aviation crashes recently.

2.  More for the longsuffering reader
At NOWP 43 [sometimes referred to as t'other place, a faux-Tyke construction], I wrote:
Readers will have cunningly noticed that if Steve appears in a post over at ONO, his links appear as links. If he is posted here though, his links often automatically blow up into a graphic. This is why two sections of the same blog – the operating systems operate differently. One day, Steve might take advantage of this but methinks he has enough on his plate as it is.
ONO, by the way, means 'Original Nourishing Obscurity'.
The astute reader will have picked up that though ONO is the flagship linked in your blogrounds, a pretty enough site with all the bells an whistles, the other, more austere NOWP, does actually have major advantages for a commenter.
For a start, if you're clearly of the unWoke us, you can just comment there as and when, an advantage if your humble blogger is asleep or fighting the NHS at the time, plus if you have a link to a graphic, often it just automatically 'appears itself' there.
The downside is that not the same number of people bother going over there.  However, the failsafe is that it appears in comments here anyway as straight text.  So there are always these three-way things going on for security of your contributions.
Now, the ones really needing archiving, vital links etc., are also put up at Gab, plus on open source word on stick here, not on desktop. Plus you yourselves make your own archives.  Eggs in different baskets, that's all it is.
Inflicted on you by James Higham on Wednesday, October 13, 2021