How can you have any pudding ...

That's the sort of logic seen in Pink Floyd's The Wall  which we're increasingly seeing rolled out now, ratcheted ever tighter. The Wail:

St Vincent residents who have not had their Covid jabs are BANNED from being evacuated onto cruise ships after two volcanic eruptions on the Caribbean island, PM announces.

That's the first part but this bit is nasty:

Gonsalves also said that residents who haven't received a vaccine but are likely to have received it in time to join the cruise ship evacuations would not be allowed to board because of possible side effects such as 'wooziness in the head'.

That's to punish them for not complying till now. Very, very nasty.  Matters not that it's an insignificant island - creeps like Jackboot in NZ and Psycho Hancock over here see it and think - gee, that's a good idea and try rolling it out here.

With embellishments for brownie points.

And so the ratchet increasingly turns, bit by bit, while the defamation campaign is also cranked up, the guilt-tripping. 'Well how can you breathe the air out here with us or buy food if you're so selfish about others?'

I was reading today from writer Sam White:

Increasingly, it's not the zealots who annoy me, it's the 'I don't really believe in this measure, but I just go along with it' people. It's them, not the zealots, who are preventing a full return to normality.

That much is so but it's that same demographic over and over.

What appalled me in the email from downunder was not that the lady disagreed with what I'd presented on all this but she 'defiantly' said she was about to have the second.  As if defiance to a nobody like me proves anything vis-a-vis the poison.

There was another from John Bowe:

Thought for the day:-  You believe in the vaccines. Good. That’s absolutely fine. I respect your belief. I am not against vaccines. I’ve had quite a few in my lifetime. But I am unsure about these vaccines. 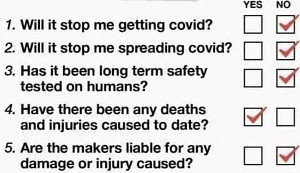 Govt, surgeries, businesses, peers - everyone is pushing the non-Science and not just shaming others - that Karen principle in itself is nothing to me - but making it impossible to even function.  It will affect people's meds for other conditions next, just waiting for that one ... and of course, eventually food buying.

As for the boatbuilding - the regulations have altered. You can't enter a port without a Covid free document, ditto now vax poisoning document. It can't even be put on the water.  That's the state of play.  You can't put into a harbour for provisions without papers of this kind.

Over 57% of marines at Camp Lejeune in NC have declined the Covid vaccine.

What happens to them?