[flight theory] and its application to sailing

Children are taught the following basics: 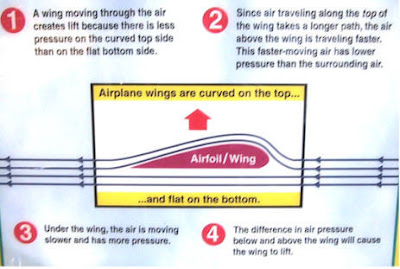 … which then leads to a discussion of the Bernoulli Effect: 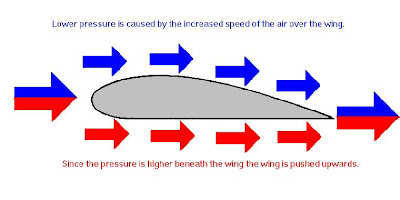 The Bernoulli Effect is taken to infer that air, when it approaches a wing, separates into an upper and lower stream, the upper stream moving faster because of the curved surface and therefore creating lower pressure, the lower stream moving more slowly on a flat surface, with both streams reaching the trailing edge at the same time and exiting the wing. High pressure below, low pressure above, the wing lifts.

Although Bernoulli's law is sound and well proven, the premise of equal transit time is invalid and without foundation in known physics. Thus the most popular explanation, world-wide, of wing operation is false, and easily shown to be so.

Aerodynamic lift of a wing can be explained and calculated through simple application of Newtonian physics. Air flow following the contours of a wing in normal flight departs in a downward direction. In this redirection of flow, downward momentum is produced.

Upward reaction force (or lift) must be equal, according to Newtonian physics, to the downward rate of change of air momentum. Inclination of a lower wing surface deflects some air downward there, while greater downward deflection is produced as flow follows the downwardly-curving upper surface.

In the downwardly-curving flow, an upward pressure gradient exists which opposes atmospheric pressure to cause upper surface pressure reduction. Bernoulli's law is satisfied with velocity changes related to pressure changes when oncoming air accelerates over the wing leading edge into the reduced pressure above the wing and decelerates in encounter with increased pressure below the leading edge.

The pressure difference also accelerates air upward around the leading edge. These accelerations occur in accordance with Bernoulli's law, but the greater upper surface velocity is more easily explained as resulting from pressure difference, rather than causing it as popular theories teach.

As air is accelerated downward by wing passage, upward recirculation occurs all around the airplane, away from higher pressure below and toward lower pressure above. Thus recirculation occurs forward and upward around the wing, and laterally outward,upward and inward to produce twin trailing vortices which is made visible in smoke behind aerobatic plane wings at airshows.

The difference between these thrusts appears as drag, commonly referred to as "induced drag," because the classical mathematics treatment is similar to that of electromagnetism and electromagnetic induction.

That’s a fairly complicated explanation for the layman but perhaps this picture shows some of the variables more clearly: 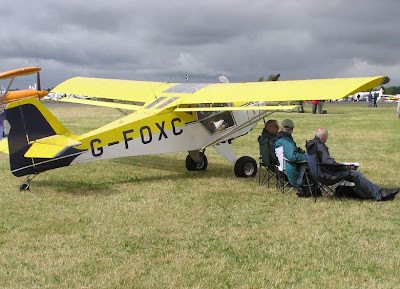 You’ll notice that the wing is angled to the fuselage, not by a lot but enough so that it is always pointing upwards, except at the tips, where you can see there is a twist downwards, if you can imagine the plane flying level. The angle is sometimes called angle of attack. Compared to the horizontal diagrams used to explain Bernoulli, this is far more complicated.

Another factor is the planform or shape of the wing. One of the most efficient is the ellipse, referring not so much to the actual shape but to the aerodynamics of airloss towards the tips. Add to that the vortices, the effect of wingtips, flaps and ailerons and it’s not so easy.

Louis A. Bloomfield, Professor of Physics, The University of Virginia, puts it this way:

When air flows past an airplane wing, it breaks into two airstreams. The one that goes under the wing encounters the wing's surface, which acts as a ramp and pushes the air downward and forward. The air slows somewhat and its pressure increases. Forces between this lower airstream and the wing's undersurface provide some of the lift that supports the wing.

But the airstream that goes over the wing has a complicated trip. First it encounters the leading edge of the wing and is pushed upward and forward. This air slows somewhat and its pressure increases. So far, this upper airstream isn't helpful to the plane because it pushes the plane backward.

But the airstream then follows the curving upper surface of the wing because of a phenomenon known as the Coanda effect. The Coanda effect is a common behavior in fluids--viscosity and friction keep them flowing along surfaces as long as they don't have to turn too quickly. (The next time your coffee dribbles down the side of the pitcher when you poured too slowly, blame it on the Coanda effect.)

Because of the Coanda effect, the upper airstream now has to bend inward to follow the wing's upper surface. This inward bending involves an inward acceleration that requires an inward force. That force appears as the result of a pressure imbalance between the ambient pressure far above the wing and a reduced pressure at the top surface of the wing.

The low pressure region above the wing helps to support the plane because it allows air pressure below the wing to be more effective at lifting the wing. But this low pressure also causes the upper airstream to accelerate. With more pressure behind it than in front of it, the airstream accelerates--it's pushed forward by the pressure imbalance.

Of course, the low pressure region doesn't last forever and the upper airstream has to decelerate as it approaches the wing's trailing edge--a complicated process that produces a small amount of turbulence on even the most carefully designed wing.

Here’s a Wiki demonstration of the Coander effect:

If one holds the back of a spoon in the edge of a stream of water running freely out of a tap (faucet), the stream of water will deflect from the vertical to run over the back of the spoon. The effect can also be seen by placing a can in front of a lit candle. If one blows directly at the can, the air will bend around it and extinguish the candle.

From this NACA foil section, you can see that the wing is not always flat below either: 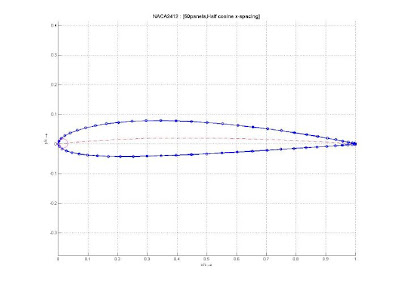 My field of expertise is not in flight aerodynamics but in sailboat aerodynamics and in aquadynamics, the design of yachts in other words; my current interest being ocean-going outrigger canoes, which usually have simpler rigs than a solid wing. For the afficianados, I’m currently exploring the crab claw, to make it reefable and the junk, to give it windward ability.

What’s more, I think I have a solution to both, which I’ll soon send to the respective associations with whom I’ve been in touch recently.

Solid wings are used, vertically, on yachts, as in the pic of Cogito, the current Little America’s Cup holder, seen below. You’ll notice that the wing consists of three sections and that if juxtaposed at a certain angle, as in the pic, it causes the leeward or curved side of the sail to resemble the upper surface of an aeroplane wing. Note the vertical slot which creates airflow to the leeward side, thus speeding the stream even more and creating more lift.

The reason the wing must be shaped this way is that the boat must ‘tack’ through the eye of the wind and have the wind alternately on either side of it. This creates mechanical issues and issues of flexibility, leading to greater complication, as you’ll see by the Australian crew trying to sort out theirs: 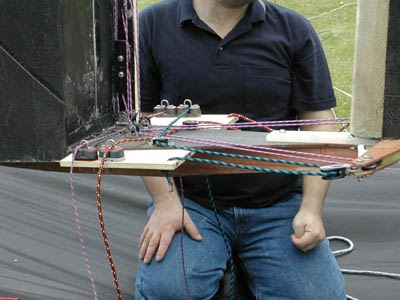 If you really want to know the physics behind these solid wings, there is one man you should check - Tom Speer.

The bottom line with softsails is that it’s not as critical in a sailboat, which goes much slower and deals with different sets of Reynolds numbers, what you do to the windward or inner side of the foil [yachts travel much slower], as long as the outer curved surface is near perfectly aerodynamic. Besides, air does not flow as well after an obstruction [the bumpy part of a mast], followed by a concave section and so there are separation and reattachment issues.

To give you a practical example – every racing cat sailor knows that your mast rotation need only be two degrees too far or too little and you’ve created quite substantial stall.

The advantage of the soft sail is lack of complexity but it loses in narrow angle of attack. Why do hang gliders and ultralights and kites come down more often?

The advantage of the wing is that it gets lift at a wider angle of attack, making stalling less likely, a nice thing for aeroplane passengers to realize but it is heavier and it’s not as easy to de-power, which you often need to do.

Here’s the soft sail set up: 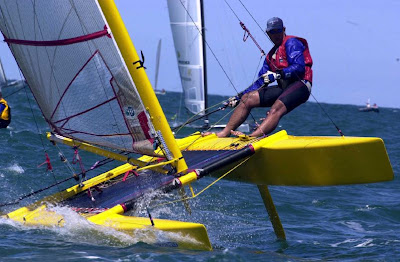 You’ll notice the curvature of the sail and especially the mast rotation of about 70 degrees to the fore and aft [front to back] line. You might also notice a lever at the base of the mast – this is the mast rotation limitation lever, connected to the sail structure itself, so when the sail goes anywhere, the mast goes with it, to create the correct outer shape.

You can see the curvature of the sail in the red batten – A Class tend to use flatter sails, as do the majority of very fast craft, this taken to extremes with ice yachts which sometimes have near flat sails and deeper, flatter masts, as in these skeeters: 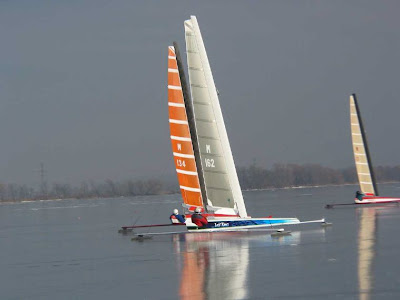 Incidentally, the A Class is the one I used to race in the 80s, sometimes even with success, although my particular boat was an older design to what you see above. Here I am racing on a light wind day. 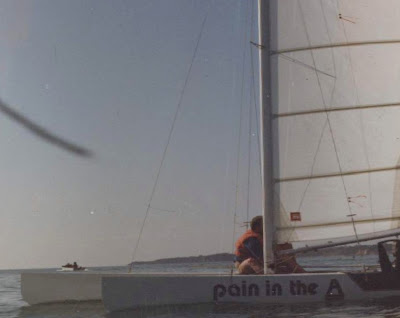 Just one last point of note. If you look at the top right of the pic and then below that, you’ll see two sets of strings streaming backwards, called telltales. The idea is to have each set roughly parallel so that the sail is set correctly to the wind.

You’ll see that though it is a near-calm day, those telltales are streaming and this illustrates that the sail can create its own wind, irrespective of what’s going on around. At least, this applies to efficient foils.

In the next article in this series, I’ll look in more detail at the flow characteristics of wings and keels, including vortices and the need for flaps, ailerons and end plates.
Inflicted on you by James Higham on Saturday, May 16, 2009