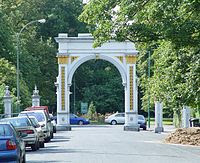 Pearson park lies about 1 mile (1.5km) northwest of the city centre and was the first public park to be opened in Hull. The land for the park was provided in 1860 by Zachariah Charles Pearson (1821-91) to mark his first term as mayor of Hull. He shrewdly retained c.12 acres (5 Ha) of land surrounding the park to build villa residences. Two years later his shrewdness failed him when he bought on credit a large fleet of ships and attempted to run arms through the Federal blockade during the American Civil War (1861-65). The venture failed and all his vessels were captured. Financially ruined, Pearson resigned half way through his second term as mayor and spent the last 29 years of his life in obscurity, living in a modest terraced house in a quiet corner of the park which bore his name.

The park, which covers c.23 acres (9 Ha) of land, was designed by James Craig Niven (1828-81), curator of Hull's Botanic Gardens. Features of the park include a small serpentine lake, a broad carriage drive running around the perimeter, and a Victorian-style conservatory (rebuilt in 1930) - all set in well-maintained grounds with plenty of trees and shrubs.

The main entrance to the park, at the end of Pearson Avenue on Beverley Road, is through an elaborate cast-iron gateway created by Young & Pool in c.1863. The gateway, along with several other structures within the park, is now listed as a building of special architectural/historic interest. The other listed structures include:

* the east entrance lodge (number 1) built in 1860-1
* an ornate cast-iron canopied drinking fountain erected in 1864
* the statue of Queen Victoria created by Thomas Earle in 1861
* the statue of Prince Albert created by Thomas Earle in 1868
* the Pearson memorial - an iron-stone monolith featuring a marble relief carving created by William Day Keyworth junior in 1897
* the cupola from Hull's demolished Town Hall built in 1862-66 (erected here in 1912) and
* three surrounding villas (numbers 43, 50 and 54) built in the 1860s

Construction on the villas began as soon as the park was laid out. Most of them remain today including number 32, the top-floor flat of this house owned by the university, which was the home of poet Philip Larkin for 18 years (1956-74).

Commentary: I am glad I looked this up, because I had assumed that the gates must have led to a mansion in the grounds and that at some stage it must have been demolished. I was particularly interested in Zachariah Charles Pearson's role in the American Civil War.

Photo: wikipedia
Inflicted on you by jailhouselawyer on Tuesday, August 12, 2008