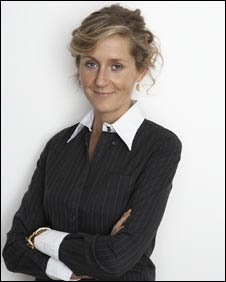 This is actually a worry and alarm bells are ringing:

Martha Lane Fox has told the BBC, as the government's new Digital Champion charged with getting millions online who are not yet connected to the internet, that she wanted a "virtual race" to coincide with preparations for the 2012 Olympics.

There are so many things about it. Firstly, she is precisely that type of Blair Babe, the right age [meaning too young to be making policy moves which affect out lives], idealistic, talented, ambitious, undereducated [by definition if she went through the PC indoctrinating school system of the last 30 years] and yet conformist and starry eyed at being "selected" by the big boys - precisely the type of "nice" person one meets all over New Britain and whom ageing men in power [as I formerly was] are wont to promote and part and parcel of the "anything new must be good with govspeak attached to it" and let's all suddenly get on on the internet and support this worthy cause and this lovely young lady.

Except that the reasons the government wants us all online I don't buy in the least and the Olympics are just as much a smokescreen as 7/7 and will usher in draconian measures in crowd control and legitimize the CCTVing and control freak measures they wanted in in the first place. It happened in Australia two years ago, behind a smokescreen and this is a tried and tested technique. There is much precedent.

I've often wondered how, when everything is pointing to command and control in this society, that we, the bloggers, can get away with the most outrageous statements and no one seems to mind, even if we are monitored. It is so opposite to all the other moves out there that I've long suspected what the game plan has in mind, vis-s-vis us.

This statement through the innocuous enthusiasm of a young lady gives an inkling of big brother - millions on line by 2012 who have not been on before.

Chilling.
Inflicted on you by James Higham on Sunday, August 30, 2009 2 comments: