[zimbabwe] it's the hypocrisy which galls 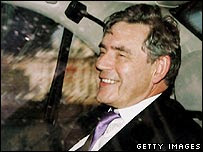 Good joke that, about predicting democracy - what sheep I reign over.

Please, if you are of a delicate disposition, excuse the tone of this post:

Yeah, right. Just put your sanctions where your mouth is, tell Milliband to find a spine and Mugabe might miraculously fall. But you have no intention of doing that, do you, you hypocrite? You need Mugabe for the strategic plan.

And in other news, this from David Farrer:

Astounding, isn't it? But it must be true: the BBC is the source: Scotland's only female police chief has spoken for the first time since taking up the role.

Disgraceful the way she was gagged or credit to her gender? And to wind up, some little gems on life in Brown’s Britain:

Firstly, from the Quiet Man:

People living in a north Derbyshire hamlet have been told they cannot have signposts because it is not a "recognised" place. Holestone Moor near Matlock has been mentioned in census and gravedigging records since 1851.

But Derbyshire County Council said the settlement was not shown on local maps and therefore was not a recognised geographical location. Resident Steve Clemerson said the community definitely "did exist".

Next, from the Norfolk Blogger, who is apparently now banned from using direct.gov.uk:

Well in part, the government do know that I exist because they tell me I already have a direct.gov.uk login, but they refuse to allow me to use it. So when I phoned them and asked them to reset my password, I realise just how serious a problem I might have.

You see, because I didn't send in any photo ID last year within 21 days, I have been banned and barred from using direct.gov.uk AND they have no way of re-instating me and no number I can contact in order to be allowed to use the system ever again.

In Salford … the Labour Council threatened to charge children from St. George’s Primary School, which is facing the axe, for the cost of a road closure if they marched in protest. No one, as yet, has paid the £1918.35 bill. A letter has arrived at the school threatening “county court proceedings” or “referral to a debt recovery agency”.

Charming, simply charming, don’t you think?
Inflicted on you by James Higham on Saturday, June 28, 2008