Evening, ladies and gentlemen.
If you’re a regular, you’d expect maybe a PD or two, some screenshots of some criminal insanity, maybe a meme or two, Steve's war room, an Evets, two or three stories I'd gathered, other links and reports.
About an hour’s worth of preparation it was and it was in place.  The heading above was its heading.
Both ipads are playing up, have been for weeks.  Main issue is selecting.  For non-bloggers, selecting is when one clicks and drags over text, then cut, copy, paste, a brill mechanism when it works.
All right, already with it having been a bad day, the post was ready … the eighteen urls hyperlinked, the subheadings, the change to Arial [it refuses to default to this and gives a miniscule font instead to compose with … that’s the sort of constant pain in the backside which goes on, preventing composing] … well, I was bombarded by flies straight at my face, my finger tapped the letter R at precisely the time the ipad decided to Select All … the entire long post gone.
To the ether.
At the same time, this bloody bombardment of flies was out of all proportion to anything I’ve seen … maybe in Australia decades ago … but this was aggressive and no spray worked. Methinks Andy has it right about what the bad people are doing over at the scrapheap they’ve created.  It was the aggression which was the salient point.
That was it.  I sealed tight all doors, windows, fissures, cracks, took a spray in each hand and went room by room, hunting the bstds down.  But the spray was not killing them.  Not at first. Everything in the kitchen and workbenches covered in plastic, spray, fumigate, saw one go for cover, got it.  Done.
Went down the hallway, spraying, into the sunroom, they were trying to hide in folds of paper or whatever.  Got em.
Bathroom/loo.  Same.  Back to kitchen, there were eight more … I counted.  Then opened a cask of shiraz and guess what … the jet thingy was underneath, nowhere near the hole.  So the entire cask inside needed turning.  Finally done.  Toodles wrote and more on that in a min.
Sitting in the sunroom now, dead flies over carpet, bone rugs, dying, not dead and that makes me angry .  Was it Woodsy or Andy said that it’s like water now.  Kills em but after twenty minutes, not before, agony for the flies.  Health and Safety rules.
Shiraz is ok but of course, has not had time to breathe.
Now it’s dawning on me that I can’t keep this hermetic seal going more than a few hours, I’ll asphyxiate.  I’ll worry about that in a few hours.
So I read Toodles and hope she forgives me for quoting a bit of it:
“In a little town in AL a baby was forgotten in the car. Gfather was to drop him off at daycare school on his way to work. He must not do it often. Hot week here. Windows up.”
That’s criminal negligence, no excuses.  Shocking thing, appalling.  State is grieving.
All right, some domestic disturbance on our landing, not going out there, shan’t answer if they knock.  Much noise out there, as if we need that.
Flies still dying.
Right, Steve’s WR you can read in comments.  Evets at NOWP.  All the other things I posted and linked just in comments I’m afraid this evening.  The only one I’ll mention is the FBI and the laptop.
How can I put this politely, remain civil?  I deleted a troll this morning at OoL, with good reason.  Now, playing devil’s advocate, he questioned if there was anything on the laptop, which of course, many readers have seen bits of.
Why troll?  Well, to be fair to a Woke left liberal academic, Psaki’s online a/c ran a story of 50 agents questioning the laptop as the Russians dunnit.  And to that mindset, that’s immediately plausible.  It’s not the reason I deleted, the reason is past history of hostility.
Had it been Bannon who’d come out with that 50 agents claptrap, weeellllll, I’d have explored … but it was bloody Psaki, warnt it?  Zero reason to ascribe any credibility whatever.  A ruse, involving the left MSM and Politico as well.
The risible part is that War Room, at the same time,had the committee of agents, heads of sections, complaining about the politicisation of the FBI, it was redacted, blacked out by someone high up, that report, never acted upon.  So we’re meant to ignore that and consider some beat-up about 50 agents they coerced to do the Russian line again?  They have to do better than that.
One of the items I did have for tonight, not now, was about Barr flat out lying.  It just goes on and on and on and on and this shiraz is getting better.  So, laze and gem, no linked thingies tonight, I’ll salvage what I can tomorrow and start over.
You have a great Thursday evening now. 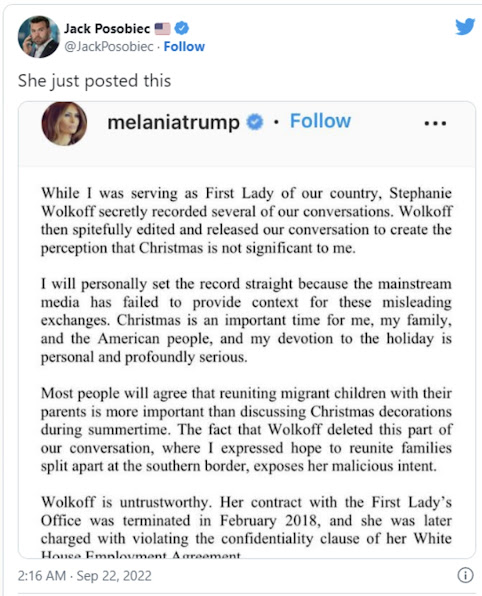 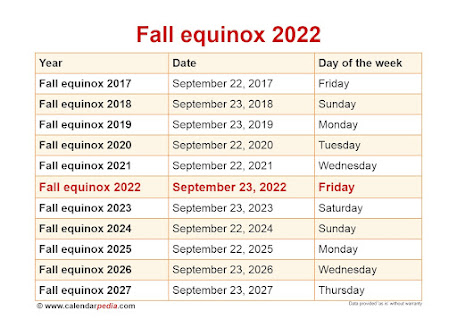 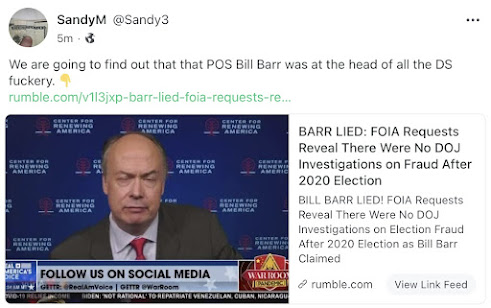 Inflicted on you by James Higham on Thursday, September 22, 2022