A tale of Russia

The picture is a western meme today but it still makes sense. 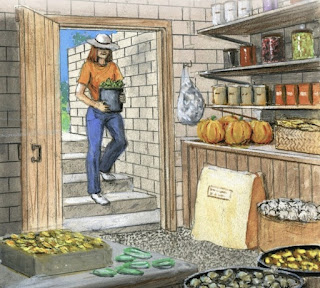 The couple in Russia who rented me their second house in town one year were fairly comfortable by Russian standards, he was local maf, she was like a farmer’s daughter, only here was the mother ten years on.
They had a dacha out of town or a garden … no major deal, not unlike the English allotment here, my gf’s family had the same … two in fact … and they were modestly off.
Anyway, this couple I opened with, whose daughter I taught … they had some livestock outside of town, they’d kill one cow a year and fillet every last bit, sealed in jars with metal lids, along with the veg, also they did the compote and jams … everything required through the winter.
Jars were big business and there would be a store near the end of the groundfloor of housing blocks … the locals would gather and exchange big jars.  Watermelons end of summer, strawberries, wild berries, mushrooms in October.  That’s how they spent summers … quite a few times I was on rollicking trams or buses going out of town.
The difference between that and right now in the west is that the Soviet authorities saw it all as typical summer.  However, in the west, the so-called govt is actively trying to suppress self-sufficiency, on pain of arrest.  In short, our so-called govts are utter monsters and STILL people can’t see this.
And won’t until they starve and freeze.
Inflicted on you by James Higham on Friday, September 23, 2022