Afternoon all.
11.  This is an older couple on Gab
… not really the type to be internet rats like your humble blogger, more just another couple who see the wrong and want it righted.
Howver, in this one, they’re repeating something Toodles wrote about the wind changing and the first signs of Fall appearing.  Our temps have dropped over here too, not sure about France.  The south of France just now seems to be like this:
Wonder if our expat boys chase French fillettes through lavender fields?  Hmmmm.  Meanwhile, here’s the US sitrep: 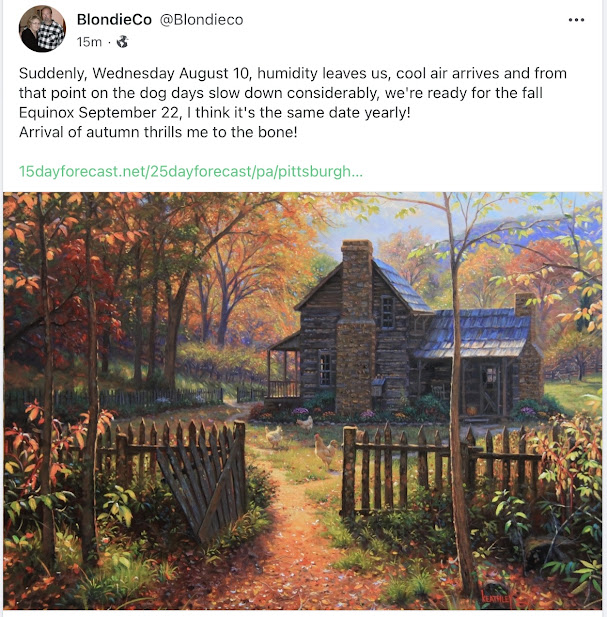 10.  Talking of train wrecks
… there’s an episode of a 70s series I liked when I was young and dunb and it’s playing at Cinema Jimbo at 5 p.m.  McCloud.  No doubt at all they played up the vaguely southern drawl McCloud versus the NYC cop chief, which was not a bad idea but …
Dennis Weaver actually was from Missouri … Denver I think from New Mexico but that’s where the hokey southernness ends.  Read Weaver’s bio, his activism.  Southerner?  He goes on about how anyone could possibly hurt one of these poor li’l moo cows for human greed and cruelty or whatever, then stars in this episode.
It gets worse.  The beef cattle the sophisticated operation rustles are Holsteins.  Yep, look them up too.  And how does the scheme work?  They’re driven into a long loader truck and about four men slaughter all 25 head in the truck zooming along the road, no blood, no guts, just 50 perfectly cut sides of beef at the other end.
Whoever dreamed up and wrote this McCloud series … I’ve not a lot to say to them.
9.  Another train wreck of a movie
Only this time, it gets pulled just before it’released.  By the way, usual profanity warning:
Inflicted on you by James Higham on Friday, August 05, 2022