Afternoon all.
15.  Dearly beloved
... we are gathered here today, incognito: 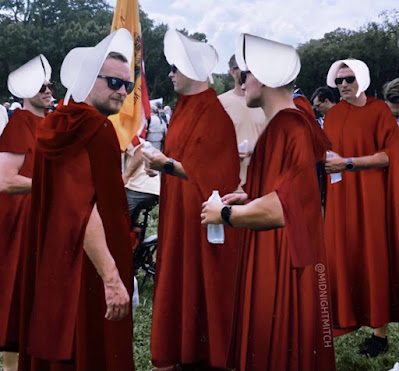 14.  Toodles
Plandemic 2020-2030
13.  Time for a ramble
... but not about what I was going to rant about, namely the seeming pettiness of Tucker in refusing to allow the mules to be mentioned.  In D'Souza's speculative explanation, he pointed to an issue months ago with Tucker.  When Dd'S said that Tucker had every right not to have him on the show, he was speaking my language.  Thing is, there are people who simply don't like us.  It could be his manner, could be his look, could be his religion ... who bleedin' knows?
But to actually join the other side just to spite Dd'S ... I can't help thinking that's not right.  Then again, the stakes are massive are they not?
Anyway, I'd rather write of this film from last evening, Undertow.  As someone pointed out, it's a quiet gem of a B movie and I couldn't help but think just how good it was and what sort of screenplay probs stem from that.
Cast was fine ... the point was made by some that while they may not have been A list in later movies, in this one they were very well cast.  I'd agree.  In fact, I'd say they were all too nice in their roles.  I mean, the tall one [spoilers] who was the creep, part of the mob run casino in Reno, was sooo polite to the low level crook who'd been in the army, had had his epiphany and now wanted to reform, that when this returnee turned up and helped the leading lady [a honey] win at craps, it was all too civilised if you see what I mean.  Hardly noir.
Soon though, as our hero is framed for the murder of the mob boss, it gets a bit more realistic.  He escapes and finds the honey's home, she immediately believes him and is full on for him, even though betrothed to the mobster's daughter, who's lying to him every second word and fake kiss.
Anyway, our guy is beaten up by a big black who's actually a principled guy ... with a mafia boss?  Ho hum.  Our guy, with the help of this girl and a friendly cop ... yep ... sets out to prove his innocence.
As commenters wrote, it really wasn't the plot ... it was the 1949 post war Chicago atmosphere ... location shooting too, broad daylight, no noir ... and like others, I started really enjoying this film.  Obviously I wanted the two leads to get together and knew it could not be till the end ... plus those suits and women's fashions ... goodness, there's no elegance today like that.
Our principled black thug sorts it out near the end and all is well.  You know what I liked?  The politeness, the friendliness, the light, the fashions, the nice ending [end spoilers] and that leading lady.  You know what? Just for that time, I forgot all the troubles we face, the utter corruption, the meanness ... and it was nice.
12.  Man from the West Country
[Let's run this one here:]
a.  GOP Still Not Mentioned the film
b.  Georgia and Wisconsin Many Traffickers Also BLM-Antifa Rioters
c.  New Mexico Ballots [can] be Filled Out by Machine Itself
d.  Demrat Judge Rules Tina Peters Cannot Oversee
e.  New York Judge Trump to pay $110,000 Fine for charge drop
f.  Court Orders FBI Disclose on Illicit Spy Operation on Trump
g.  Lindsey Graham Audio Nation Will Unify Around Biden After Jan. 6
h.  Fed Judge Dismisses Lawsuit Against DeSantis Over Disney
i.  Ukraine Cuts Off Gas to Europe and Inflation Double Whammy
11.  Kathy Barnette
There are some curious things about all this.  Breitbart seems to be mainly pro-RINO as far as I can gather and their take is anti-her, plus they shifted the story to the bottom of the page very quickly.
Those gainst her are attacking her military record, saying it was not so and that she is refusing to answer, also that she refuses to release it. Forces authorities, combined, say there's nothing wrong with what she said, it makes over the ten years in total.
Her grades were pretty low and that was attacked. The RINO in contention is McCormick, the foreign agent Oz.  There were various things in comments, some worth looking at.
One said that she had said that MAGA was not Trump, it was the people, others said she had a chip on her shoulder about whites.  One soldier said her attitude was bad and he was glad to come down hard on her.  Another said female blacks were the worst soldiers - lazy and self-entitled.
She lost badly to the white Demrat woman in 2020 but that was the House, not the Senate. So ... if the other two are out because of the above, what about her?  Penn State is not looking too good.
Inflicted on you by James Higham on Thursday, May 12, 2022