Elevenses.
9.  Man from you know where
[This first one I don't buy, for reasons stated in comments.]
a.  Heavy Losses Attempting To Cross River In Bilohorivka
b.  Scott Ritter - Ukraine & Russia, is one side winning?
c.  British Officers On Donbass Front Line
[Why?]
d.  Civilians Under Fire Everyday
e.  Docs US Biolabs Ukraine Attempt Create Controlled Epid's
f.  Gravitas: Americans are buying second passports
8.  A couple of other things
https://dailysceptic.org/2022/05/13/face-masks-lead-to-breathing-dangerous-levels-of-carbon-dioxide-even-when-sitting-still-study-finds/
Who seriously doubted they were bad news?  The insane?
Pssst, says haiku, need a little extra?
7.  Confession
I do keep secretly checking the scores of two of my three teams [the other is out of season over there just now]: 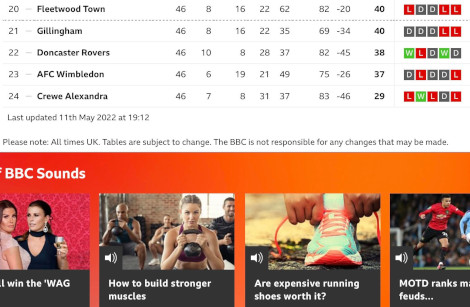 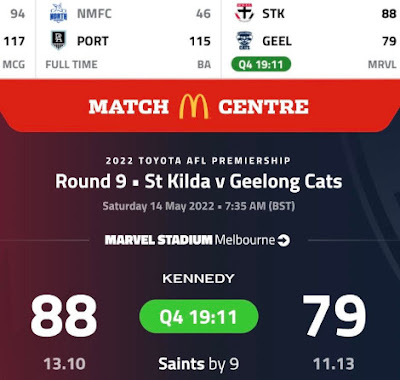 Both pretty down just now.  Predictable on both counts, I've expected the first for two seasons now and in the latter, they've always struggled against the bogey team St Kilda, even in premiership years. No matter.
Now, the thing I really wanted to look at, and it is starting to get me down, is the lying in advertising.  Wot, only now?  Well ... it's just so bad these days, ubiquitous, universal. The four people in the 'stronger' picture.
All right, the regulation black man is ok in this case, one expects him to be in the gym.  Now, look at the surprising white male but note the face fuzz. As I saw this become the norm, I went back to clean shaven and bought a new razor.
Now the girls.  The one at the front is ok, it's showing she's just as strong as the men and can do anything they can do and probably more ... yawn ... but the one at the back is there for the sexuality - look at her attire and squatting.
As for the weights, they're all lifting the same, which is bollox of course - that's not a usual exercise for men - we do various biceps, triceps and then shoulders/neck at different times.  In squats, we'd have the bar with whatever loaded on or else the Smith machine.  I preferred free weights but Smith was good for things like neck.
Thing is, any male gym rat would know what was going on in that picture.  Most would just smile, I get miffed because of all the other lies we're seeing right now out there ... a form of shell shock I suppose.
6.  NOWP
a.  IYE, Pelosi and booze:
https://nourishingobscurity.wordpress.com/2022/05/10/admin-page-115-for-readers/comment-page-1/#comment-2902
b.  DAD and Saturday's snatches:
https://nourishingobscurity.wordpress.com/2022/05/10/admin-page-115-for-readers/comment-page-1/#comment-2901
[Memo to self: think whether to mention certain blog item subheadings to chaps of good character or whether to remain shtum, on the grounds that it might incriminate me.  😇]
5.  The need to be wakeful and watchful
This refers partly to N4 but also to a letter this morning from a supposed branch of govt, offering me something.  And now the NHS have sent minutes ago, wanting something non health related.  Deep suspicion on my part.
As for N4 below, I cannot afford to run that openly at ONO but it's still on my mind.  Obviously, the globo forces say one thing, Andrew Torba, for example, says another.  It's not my immediate war, so I for one am sitting back and watching, we at N.O. are bringing to our readers.
My advice, for what it's worth, is to use the mouse hover over any unclear url before clicking, we do not lead you astray, if we did, we'd lose bona fides in one fell swoop.  We all need to be ultracareful, as John Connor needed to be before letting in the T-800 shortly before it killed him.  And watch out for those Body Snatchers too. ☺️
4.  Our man across the way
In the url.
Inflicted on you by James Higham on Saturday, May 14, 2022