Greetings, earthlings.
3.  Meanwhile, this is [mebbe] worth a look

By the way, the dark bkgd is because my screen goes dark at night, white during the day.  Anyway, this MAGA gal came storming in, attacking him for supporting white women with black men.  This followed:

It got me thinking.  What about the black kid born in the US, his parents were too, back to the plantations?  They're loyal to America through and through.  Look at his age, he was trying to show support.
Now, Gigi Girau herself.  She's self-described as Cuban American and as you know, many Hispanics are pro-MAGA.  And there was I in Russia, Russian gf, twice said yes to marry me, I was the one dragging my feet ... what then?
Against that, I do not like the idea of black man white woman because of the factor of great replacement.  What of Anglo-Russian though?  What of Anglo-Cuban for that matter?  And in case you're concerned, no, I'm not thinking that way, certainly not with a millennial, even were she that silly to go with a Reynardine.  She's married anyway.
But coming back to supporting millennials ... I do when their politics are like ours ... I align with everyone from post-millennial to war generation [any older have probably shuffled off, as I soon shall].  Yes, I attack those little idiots spouting Woke claptrap, but I understand why ... it's their brainwashing, just as my gen is to a large degree.  Corbyn is an old idiot, the worst kind.  So is Cameron a young idiot.
Male female divide?  Gals are gals, we are what we are.  Must we be enemies?  As for gals storming in like Gigi, and Nathalie with PD ... so what?  We are what we are.  I'm all for detente, comrades.
Lastly, one of those voting against the aid to Azov and Zelensky was Tuberville, known as Tubbs locally.  Interesting because my team there is Bama and yet he, head coach till recently of the detested 'old enemy' Auburn, voted for MAGA and placed himself in danger, just as did Josh Hawley ... remember Josh on Jan 6?
Josh is one of the good guys, an up and comer like Ron de Santis.  But look at his name.  We live in crazy times.  All I can say is an ally is an ally. I'm a huge fan of Salvini in Italy, also Orban in Hungary.
2. Not our country in the main

... and yet what happened affects us down the line:

The Senate just voted 86-11 in favor to STEAL another $40 billion of US taxpayer money for Ukraine.

These 11 and the 57 House Republicans that voted against it is all we have in Washington. [Commenter in reply]

To underscore this, even The Hill, that leftwing bastion, posted this: 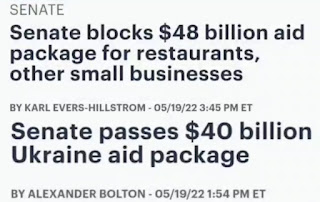