Morning all.  Shall get onto Steve's and other issues around 8 a.m.
5.  Heartbeat?
The following screenshots explain themselves.  N.O. is a secular site, with a mainly secular readership and while I'll defend the faith if attacked, I don't usually raise those sorts of issues here, unless the context demands, and even then obliquely.  However, I do open up on sites which present themselves as Christian, inc. this young lady's: 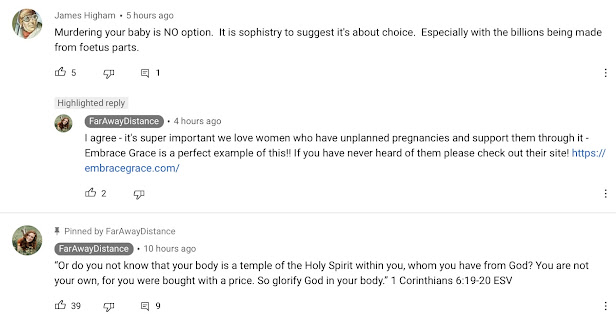 There were other females there commenting in a similar vein.  I've nothing to add, these gals will get it all sorted out, it's their world now, they are precisely at that childbearing age and I'm not.
At the same time:

Quick check to remind myself:

A dear friend and I publicly fell out over this a long time back now and the point I made was she wasn't the only one affected.
In my marriage and family days, there were two situations, one with WN1 and one with WN2 where contraception failed. WN1 and I discussed it, then she did what she did, I did not oppose. WN2 pointed to her waistline but did not discuss it, did not even tell me what she was about to do.  All I can say is there were already progeny in each case.
Since those days, my position has changed to that in the first screenshot.  Now I'm looking at Kristi Noem and her stance.  Hmmmmm.
4.  There's the issue itself of masks
... but then there's the thug behaviour of one side in the issue.  Easy enough to find - substitute teacher duct taping a mask on a middle school child in Pennsylvania, then this:

An earlier incident took place after a Christian preschool director in California was barred from ever working with children again after she ‘failed to encourage’ two-year-olds to wear masks.

After the Department of Social Services closed Foothills Christian Church’s preschool in San Diego, its director, Tiffany McHugh, lost her license after she could not keep the students’ masks on.

‘We were coming up against a lot of parents who didn’t want their children to be masked that young,’ McHugh told a local news outlet.

‘There were a lot of children who were just too young to wear masks, they pull them off. It’s really difficult.’

https://www.redvoicemedia.com/2022/01/elderly-woman-handcuffed-by-police-for-not-wearing-mask-properly-at-city-council-meeting-video/
Rather than use the word fascistic, let me use the word Draconian or thuggish.  On any topic, be it women's rights, climate change, whatever, there is one side which protests and gets charged at by thug plod, Antifa etc. but they do not attack and beat up themselves.  Then there are the ones whose behaviour is thuggish.  Whatever the issue is, the enforcement by draconian measures is on the wrong side of history and the massed dissenters are right.
3.  Benghazi ... a take
... by Angelfire ... you decide for yourself:
Ambassador Stevens was sent to Benghazi to secretly retrieve US made Stinger Missiles that the State Dept had supplied to Ansar al Sharia in Libya WITHOUT Congressional oversight or permission.
Sec State Hillary Clinton had brokered the Libya deal through Ambassador Stevens and a Private Arms Dealer named Marc Turi, but some of the shoulder fired Stinger Missiles ended up in Afghanistan where they were used against our own military.
On July 25th, 2012, a US Chinook helicopter was downed by one of them. Not destroyed only because the idiot Taliban didn't arm the missile. The helicopter didn't explode, but it had to land and an ordnance team recovered the missile’s serial number which led back to a cache of Stinger Missiles kept in Qatar by the CIA.
Obama and Hillary were in full panic mode, so Ambassador Stevens was sent to Benghazi to retrieve the rest of the Stinger Missiles. This was a "do-or-die" mission, which explains the Stand Down Orders given to multiple rescue teams during the siege of the US Embassy.
It was the State Dept, NOT the CIA, that supplied the Stinger Missiles to our sworn enemies because Gen. Petraeus at CIA would not approve supplying the deadly missiles due to their potential use against commercial aircraft. So then, Obama threw Gen. Petraeus under the bus when he refused to testify in support of Obama’s phony claim of a “spontaneous uprising caused by a YouTube video that insulted Muslims.”
Obama and Hillary committed TREASON!
THIS is what the investigation is all about, WHY she had a Private Server, (in order to delete the digital evidence), and WHY Obama, two weeks after the attack, told the UN that the attack was the result of the YouTube video, even though everyone KNEW it was not.
Furthermore, the Taliban knew that the administration had aided and abetted the enemy WITHOUT Congressional oversight or permission, so they began pressuring (blackmailing) the Obama Administration to release five Taliban generals being held at Guantanamo.
Bowe Bergdahl was just a useful pawn used to cover the release of the Taliban generals. Everyone knew Bergdahl was a traitor but Obama used Bergdahl’s exchange for the five Taliban generals to cover that Obama was being coerced by the Taliban about the unauthorized Stinger Missile deal.
So we have a traitor as POTUS that is not only corrupt, but compromised, as well and a Sec of State that is a serial liar, who perjured herself multiple times at the Congressional Hearings on Benghazi.
Perhaps this is why no military aircraft were called upon for help in Benghazi: because the administration knew that our enemies had Stinger Missiles that, if used to down those planes, would likely be traced back to the CIA cache in Qatar and then to the State Dept’s illegitimate arms deal in Libya.
2.  Is Tx Abbott a RINO?
https://thenationalpulse.com/2022/01/21/allen-west-trumps-texas-torchbearer-overtakes-governor-abbott-heres-why/
Inflicted on you by James Higham on Saturday, January 22, 2022