Forced into a situation of war

The most dishonest thing about the fraud was touched on by last evening's rundown on all the misregistration, people out of town, dumped ballots, there were at least six aspects, including the machines, which should not have ever been used in the US in the first place.
And that most dishonest thing was that if the other side had done all those things, inc. covering up windows, preventing scrutiny and so on, there would have been hell to pay, all day every day.  When the sheer numbers are so out of kilter, then for someone to even try to suggest nah, nothing wrong in the leadt, the numbers show Brandon increased his vote ... that's one of the most dishonest things I have seen.
You multiply that attitude by millions and all I can say is that that's no way to run a country, where DemRats and RINOs combined are completely unethical people ... with a leer.  If not personally unethical, then supporting the unethical by their votes. And of course, it's understandable, as they have zero interest in maintaining a system of representative govt, functioning supervisory bodies, the things which mean civilisation.
The most galling thing is when there is no independent arbiter - it is ethical versus unethical and the unethical never adhere to rules, they adhere only to might.  Might is right ... because we can, they say.  And wotchoogonnadoaboutit?
When these represent about 40% of the nation - completely unethical people - then that nation is in desperate trouble.  The cabal is forcing that part of the neo-Hegelian interpretation where 'the people' demanding action are outraged.  That's where they are right now.  And people like me are desperately cautioning against the well factored-in falling for the civil war of arms.  But these bstds on the other side know human psychology, the devil has been around a long, long time.
In that light, my friends at Ammodotcom ask this:

How much chance does an armed population have against the United States government? What does the power disparity say about American political culture?
These are the questions we tackle in our recent article "A Distributed Capacity for Violence: A Brief History of Weapons Technology and Political Power."

Underpinning all of this tiered, sequential delegation was an uncomfortable, yet necessary, truth: That the individual must retain an implied threat of force against the state, and that this threat must be credible, in order to stop the state from deviating beyond the consent given to it or otherwise overrun the individual’s natural rights - what we’d refer to nowadays as a “power grab.”

But what happens when the state’s power grows so vast that individuals cannot resist it whatsoever? That they cannot provide a credible, implied threat of force to counterbalance state power because the state’s weapons have become so devastating? When the state no longer has the consent of the governed, and instead has intimidated the governed into submission?

My mate in Russia, a student of history and politics, continues to shake his head as he sees all the signs ticked off one by one in the plunge into demonic violence redolent of the Bolsheviks, except that was a lie in itself as well - it was a minority doing it, and always has been - an organised, funded minority. 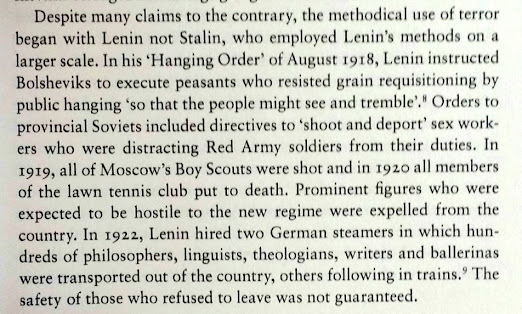 When that methodology is employed in every former 'western' land, then you have this situation in very country, heading for a road full of people coming the other way. 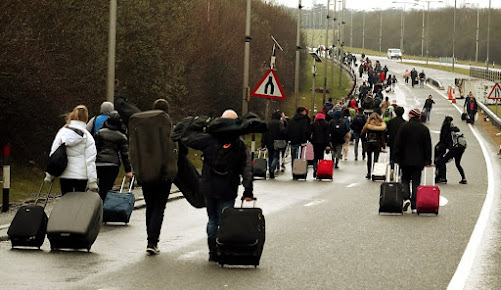 Therefore, the possible rump of resistance is no longer there, it has departed, it's clogging up the roads, it is like those heading for California during the Depression, it is days long dance competitions, cruel and fiendish, for a few dollars - that is what he cabal and its unethical supporters the DemRats and RINOs want for you.
They hate humanity.
Inflicted on you by James Higham on Thursday, October 28, 2021