Ratchetting up the narrative yet again

FFS.  You can gather my mood this late Friday afternoon from the last musical post - it was pretty upbeat, wasn't it?  Nice glass of red, pie in the oven, things were looking good.
Saw an item by Atlas Obscura on mail jumpers or those kids they employ at base rates to deliver to docks and piers on rivers - not sure if our Toodles gets mail that way - but it seemed [past tense, notice] a nice way to move into Friday evening.
Oh how quickly we forget what we face out there.  Oh how we want an effing break from the crim-loony narrative.
Not hours after excoriating tech journals for egregious Wokery, your humble blogger's defences well up against tech journals, to the point they need scouring for Wokery before printing anything, I saw this geographical journal and thought that was nice - something soft to move into the night before we rejoin hostilities around 7 p.m.
That was the plan.
I should have known better.  Every single journal liked by thousands is taken over, twisted and soiled by Woke filth - they never allow any respite whatever, not even one moment.  I should have known from the woke female journo.  I should have known from the upfront picture of a girl jumping from a boat to a dock above the "read more" line, very clever.
This picture below I had to dig out from halfway through the article: 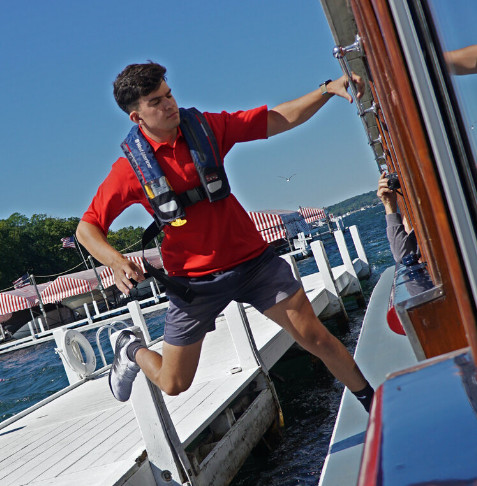 Before getting into this, note the muscle definition in the legs and note he's leaping from pier to boat.  The picture they open with is a kid the same age, female, no muscles, leaping from boat to pier.
In a sane world, the male of the species likes to reserve the right to contrive to make the female look better. Example - a weekend away hunting in Russia, similar situation of muscly boy, typical girl.
All right, we did arm wrestles and she fancied herself - I'd been beaten before at backgammon and pool by females so I was wary - but then it became apparent that she was ... well ... a girl. So it was high drama and at the last, with a huge push, she beat me, then started cavorting around the room.
Good stuff.  Her BF though was not taking that S.  So he squared up and he had some strength, I pushed the instant she called go, max force, counted myself lucky.  Trouble was, Ksenia was crowing about it, wish she'd have just shut up, he challenged her and the predictable happened.  Ruined her evening.
I was going to have a second go with him and play fair this time, drag it out, hopefully he'd have won anyway and then honour would have been satisfied all round. But he chose to sulk.
Stf him, thought I, let him mope.
Any decent person is always going to allow a narrative to play out in a social situation like that, everyone in the room bar her knew what it was about, no harm would have been done if he'd taken the challenge and beaten me.
All right, the difference between that night in the forest and this article is night and day - this journo, Rebecca Deurlein, gave that young man no chance to be gallant and he, being naive, dazzled by her, never for one second thought his admission to her about falling in the water eight times so far was going to be used politically.  Guess how many times the girl had fallen in the water?
Yup, never mentioned once of course. Pure narrative and weakness personified.  Calling a girl weak?  Just what does that achieve?  Nothing whatever.  Nor does using terms such as 'like a girl'.  I don't use such terms, not interested. Girls are massively powerful in their own way, otherwise why did Ulysses need to be tied to the mast?
What we're talking here is letting things take their natural course, letting the boys be gallant, letting the girls respond in their own way.  Everyone ends up with saved face.
But Ms Deurlein could not let that happen, could she - either she or the journal had to have yet another ratchetting of the narrative, the horses' backsides.
Do you think I give a rats' about an arm wrestle or a jumping onto a jetty and back?  In themselves?  As readers well know, the smoke from the nostrils right now is the effing Narrative, the Wokery, the gilding of the lily which Christy O and our Julia will not have a bar of, bless their hearts.  I'm sick to bleedin' death of it, the whole damned thing.
What I want to see is the lady trying to find any excuse to praise the man.  What I want to see is the man trying to find any excuse to praise the lady. I do not want the lady losing face and she sure as hell should not contrive for him to either.  That's how it's done.
And that's why Atlas Obscura is also now off the list.  Not many left, just our blogs.
Inflicted on you by James Higham on Friday, September 24, 2021