15. Any culinary delights over your way today?

14.  Glad Julia tackled it, no need for the hated male

"We need more diversity in the police force!"
"We'll have to lower the fitness requirement for that."
"Well, what's the worst that could happen?"
🤦‍♀️ https://t.co/VZ35FoJMXY

The natural psych-reaction of a male to any sort of putting upon a lady is for the male to step in and assist.  We're just hardwired for that. However, we don't, as a sex, always differentiate between ladies and others with womanly-bits - say Karens, SJWs, slappers and so on.

Thus, I might be having a go here at the blog at the Hultgreen-Curie female and in come my Bros, saying steady on, James, there are plenty of good wimmin who can do many things.

Indeed yes - here's a video on some of 'em.  I do see these things you know.

However, there is also this pesky feminazism thing which has the female of a certain hate-men type doing all she can to bring down our sex, even to taking away our livelihoods and this sort of female, plus pussified males hanging onto her tattooed hands, takes us to the cleaners, having persuaded us to marry ... and so on.  No doubt the ladies reading this have much to say on boorish males in return.

When I see that amusing clip above, myfirst reaction is - I just adore the way girls run, with the arms flying out sideways like that but sadly, that glosses over what the beech tree was trying to do in the first place - arrest someone for virtually no cause.  And there's more than a little power-gone-to-the-head in it, not just with the females but all Plod today who go out and do this.

And of course, as Julia says, the physical standards in the forces for females are a crim's delight. Jane Regan of the Sweeney she ain't, that Plod pursuer. Demeaning, brings Plod into sad disrepute. And who heads them up?  Cressida "Brazilian electrician" Dick.

13. Quick review of the Twitter-Gab thingy

The way it's worked out is Gab is heavily Americocentric, so almost no Brit or other world news, Twitter did not die and it has a range of news, which is a pity because the pundit must go where the news is.  For now.

Deliberately not going to the supermart just now, partly to avoid telling people off, which might get me into trouble next time, partly to conserve moolah, and partly as an experiment, to see if I can subsist with just my local shop.

It's pretty clear that the things I need to replenish from the supermart once in a while include tenderheart cabbage which lasts for weeks unrefrigerated, most everything else is available. Fish is better from the supermart, so is creme fraiche and partly salted butter, apples and clems.

To that end, they've really come to the party - I saw broccoli there today -  and thus I blow a raspberry part of the way in the general direction of Morrisons and other giants.  At the moment.

If this is none too prepossessing below, it's because it's the first real meal on corner store provisions - tasted fine, I have some real beef for later, I could have had bacon and ham, it's fine for now, supplemented by fruit, granola and blueberry yoghurt.  Plus ginger cake. 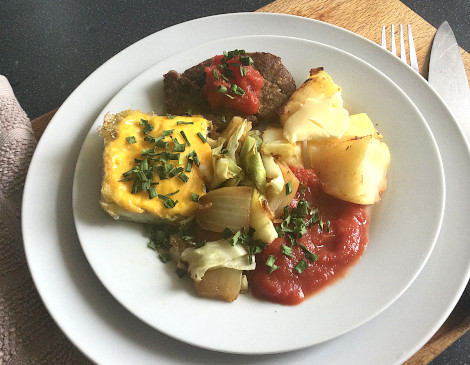 Inflicted on you by James Higham on Saturday, March 06, 2021