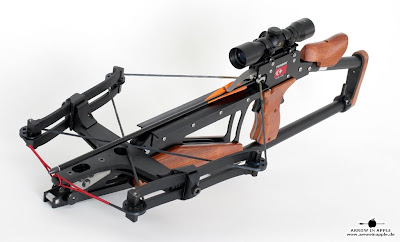 Yes, yes, Agincourt, when England's finest took out the Froggies with the noble longbows and so on ... the longbow is a wondrous thing but there's something about the crossbow I've always liked and when it comes down to it, as far as I can understand, it's still legal over here for home defence - correct me if I'm wrong.

Now, a number of these, primed and bolted to the bannisters and assorted woodwork around the house, strategically aimed, would be a quite effective disposer and disperser of the dreaded intruders - they wouldn't know where the next bolt was coming from as they ventured through the house and the best thing - they're near silent so you never have any ammo problems.

Of course, when we come for the Westminster pollies and the BofE chiefs, the longbow would probably be the better choice - more easily carried and quicker to utilize but I was talking about home defence really.
Inflicted on you by James Higham on Wednesday, September 02, 2009