From the "That's Cool" Department 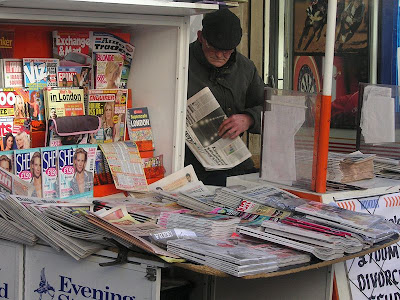 This is a guespost by Matt, of Buckeye Thoughts, my American friend and correspondent, in the category "Old Head on Young Shoulders". There's not much that Matt misses over there. This post is originally published at Matt's blog, here:


It turns out the British in London can now get their ATMs in cockney slang. For those that don't know what it is, remember this Austin Powers scene?

Now, I think Cockney Rhyming is too cool; a slang that you can't decipher if you're not British. VA has blogged on several posts about American dialects and accents that seem to be disappearing. Since I rarely ever get outside of the Midwest, I don't know if this is true or not. I do know though that despite having lived in this area almost my entire life (two states, in particular, as the blog's title and description say), I do not have an accent. I wish I did have one :-)

Here's the article reproduced below

By RAPHAEL G. SATTER, Associated Press Writer – 1 hr 11 mins ago
LONDON (AP — You'd better get ready to use your loaf if you want to get your hands on some bread. Over the next three months a cluster of East London ATMs will be offering customers the chance to withdraw cash using written prompts in Cockney rhyming slang, the area's colorful and often impenetrable dialect.

ATMs run by a company called Bank Machine offer a language option allowing customers to enter their "Huckleberry Finn" instead of their PIN, and rather worryingly informs them that the machine is reading their "bladder of lard" at a prompt about examining their card.

The origins of Cockney rhyming slang are obscure. It is thought to have been used by market traders who needed a way of communicating without tipping off their customers.
It works by replacing a word with a short rhyming phrase. For example: "Money" becomes "bread and honey," which in turn is shortened to "bread." Similarly, "head" becomes "loaf of bread," and then just simply "loaf."

Few use the slang with any regularity now although most Britons know a few common phrases, such as "trouble and strife" for wife and "apples and pears" for stairs.

Gabriella Alexander, who made a withdrawal from an ATM, near Spitalfields Market, said the stunt was fun. But she added that that withdrawing "sausage and mash" — or cash — "made me a little uneasy."

Slaney Wright, a 32-year-old charity worker, attempted to withdraw money from the ATM but visibly tensed up when she realized the machine was talking to her in Cockney slang. She immediately canceled the transaction and ripped the card out of the machine.
"It looks like someone's been messing with it," she said.

Post script question for NourishingObscurity readers: To you all, especially those that live in the British Isles, how is cockney rhyming viewed? Is it a lower class characteristic? Do people think it's humorous and not really part of English?
Inflicted on you by Anonymous on Tuesday, August 25, 2009