[dating of the gospels] part 2 john a. t. robinson 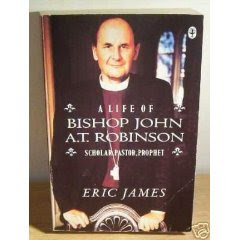 A critique on his book goes:

Why should people read this book? It is a fascinating read, with John Robinson coming across as a humble yet creative person.

I don't agree with all his theology, but yet admire him - he was the writer of the controversial Honest to God in the 1960s, he was called to defend 'Lady Chatterley's lover', and had a breadth of writing, from biblical material to ethics and modern theology.

The biography of John Robinson, a central figure in 20th century Christianity, and one the great influences of our age. Scholar, pastor & prophet, he was one of the most original thinkers within the Church of England.

That’s the reason he should not be dismissed in such an offhand manner by the PC Left. A man’s a man for a’ that and a scolar is a scholar. We don’t have here a kook or an amateur – we have a professor, an academic and a historian whose CV is pretty impressive indeed and before he came out with his book on the dating, was revered as such.

Here is a mini-bio of the man

One of the great mentors of my life was an English bishop and New Testament scholar named John Albert Thomas Robinson. He burst into public awareness in the United Kingdom in the late fifties when he testified before a commission seeking to ban the novel Lady Chatterley's Lover. For a bishop to favor Lady Chatterley titillated the English media who love juxtaposing religion with sexual expose. People were not aware at this time that this Bishop of Woolwich was also a serious student and a prolific, if not yet well known, writer.

In 1962 a back ailment required that John Robinson be confined to bed for a number of months. His fertile and imaginative mind was freed from other distractions and he wrote a little book called Honest to God that appeared on the bookstands in 1963. It made the controversy about Lady Chatterley's Lover look pale by comparison. This book forced people to recognize that the language of traditional religion was not a language that people believed today whether they continued to use it or not.

An advance story in London's SUNDAY OBSERVER trumpeted the headline, "Bishop says the God up there or out there will have to go." Thus, the Church was launched into what came to be known as the "Honest to God Debate," and John A. T. Robinson became a household word in the English-speaking world.

That little book sold more copies than any religious book since Pilgrim's Progress. It was translated into dozens of languages. It was discussed, not just in religious circles, but in pubs, on golf courses and over bridge tables. It brought religion out of the churches and planted it firmly on Main Street.

One would think that the leaders of the churches would have welcomed such an initiative, but that would be to misunderstand the nature of institutional religion. The religious establishment, instead, recoiled defensively. Every would-be theologian rushed into print to denounce this book.

Calls were issued for Bishop Robinson's resignation or for him to be deposed for heresy. A book of reactions to Honest to God was published to keep the waves rolling. It revealed just how deeply John Robinson had touched the hot buttons of religious fear that the traditional defenders of the faith struggle to conceal.

The echoes of this debate reached my ears in my small-town parish in Tarboro, North Carolina. I did not rush to read the book. Reviews indicated that it quoted extensively from Rudolf Bultmann, Dietrich Bonhoeffer, and Paul Tillich. I was quite familiar with these thinkers and so I dismissed the book as a popularizing effort of no great significance. Nonetheless I placed the book on my reading schedule, and finally got to it in 1965.

I remember the day I first opened this book. Vacationing on the Outer Banks of North Carolina, I sat on the beach one afternoon with Honest to God. I did not put it down until I had read it through three times. I knew from that moment that my life would never be the same.

John Robinson made me aware that my childhood understanding of God would not live in my world. He forced me to face the fact that the words of both the Bible and the Creeds sound strange to post-modern people and that my faith had to grow or it had to be abandoned.

I began on that day the long, tortuous and, to this moment, not yet completed process of rethinking all of the symbols of my religious past so that I could continue to claim them with integrity. I also pledged myself never again to use pious clichés that I clearly no longer believed.

This book drove me first back to the Bible. I knew that the Noah story, or the splitting of the Red Sea story, could not be literally true, to say nothing of the stories of Jesus turning water into wine, walking on water and ascending to the heaven of a Ptolemaic universe that had ceased to exist with Copernicus.

My church had prepared me poorly, I discovered, to live as a believer in a post-Copernican world, to say nothing of a world shaped by such giants as Newton, Darwin, Freud or Einstein. The Church still lived in a world of miracle and magic, where reward and punishment were meted out by God according to human deserving.

Seven years later, in 1972, this internal struggle emerged externally in the form of my first book which was deeply shaped by the "Worldly Holiness" chapter in Honest to God. My publisher entitled my book Honest Prayer, hoping, I am sure, to be pulled into the Honest to God energy that was still abroad.

This larger-than- life man came to speak in Richmond on the 10th anniversary of the publication of Honest to God. He was very British, displaying little emotion. After the session I was introduced to him. I thanked him for what his writing had meant to me. I presented him with a copy of Honest Prayer.

We talked for a while and then we each returned to our respective lives. Five years later in 1978 John and I met again at the Lambeth Conference of the Anglican Bishops of the world. I was now one of those bishops and John, who had returned to Cambridge to teach New Testament, was present as a consultant.

Both of us, bored by the speeches, decided to leave early and walk through the woods of Kent to discuss the New Testament. We came across a country pub and stopped to share "a pint." We even engaged in the pub game of "bowls," but all the while still discussing the New Testament. It was such a pleasant experience that we decided to repeat it each day. So while the bishops were debating, John and I probed the gospel tradition and I learned from his incisive mind.

In those years John and I both continued to write books which addressed the theme of bringing the church into dialogue with today's reality. I read everything he wrote. John Robinson's echoes were heard in me every time I spoke and certainly every time I wrote. When one reviewer referred to me as the American Bishop Robinson, I was deeply touched. After Lambeth, John and I began to correspond. I yearned to bring him to lecture to our diocesan family, and finally he agreed.

Six months before his scheduled appearance, however, John wrote that he had received a cancer diagnosis and had only a few months to live. He sent me a copy of the sermon he preached at Clare College, Cambridge, the Sunday after he received the diagnosis. I was deeply touched by it, though it made me aware of how lonely I would be without this kindred spirit. John died in the early months of 1983. In my grief I was pleased to be asked to write the American tribute to him published in THE CHRISTIAN CENTURY. Someone else had recognized how important he was to me.

I did not have either John's intellectual training or his Cambridge PhD. Yet after his death, in a real sense I was the only other bishop who was addressing publicly the issues he had raised. That fall of 1983 I published a book entitled Into the Whirlwind: The Future of the Church. It marked a watershed moment for me from which there was no turning back. It was not that it was a great book, but reading it today I discover that the seeds of every book I have written since were present in its pages.

Part 3 concerns his arguments.
Inflicted on you by James Higham on Sunday, August 16, 2009