Blind to the glaring obvious 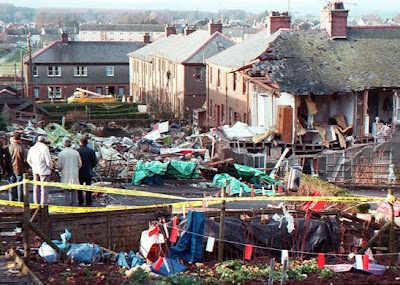 Sometimes people miss the glaring obvious as pointed out here. The same photo and footage was all over the world, but it was not mentioned by anyone until my eye for detail drew attention to it. For that I thank my Asperger's Syndrome. It is said that those who suffer from it can say inappropriate things at the wrong time.

Google Next time...Relax before you fly, and the two top Google rankings both feature the post on Nourishing Obscurity. That is an achievement in itself. Below the links to Nourishing Obscurity are links to Metro, Time Magazine, The Herald, and various blogs all pointing out secondhand and not one has the decency to state where the thought first originated.

I am not claiming that others will not have seen it and thought about it, but you heard it first here in published form which had the effect of alerting others to its exsistence.

People can get blinded by emotions. They are angry at the figure walking up the plane steps so do not see the banner. In prison I would watch those watching the football match being played not the game itself which they were absorbed in. It is like the US Secret Service bodyguarding the President, they watch the watchers.

Now, with all the fuss about the release and celebrations going on the media have another thing to focus upon the banner message and the irony.
Inflicted on you by jailhouselawyer on Saturday, August 22, 2009