[cry rape] sorting out the truth from the lies 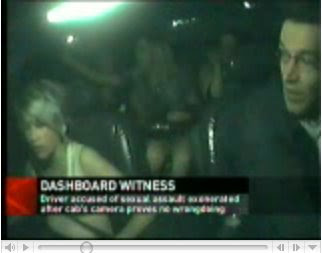 Click the pic to see the vid of four drunk girls who got into a cab in Edmonton, started to smoke, which is illegal there, they got nasty and refused to pay, then, when they got out of the cab, told passers-by he'd raped them.

Let me report what happened. The cabbie was sensible enough to have caught it on film and when the police came to investigate his rape of them, he showed them the footage.

The police reaction? Oh, we can't charge you then. Er ... pardon? Case closed? Now just one minute! They falsely accused me, he told them. No, we're closing the case - no case to answer. Oh yes there is, he pressed. There's the little matter that if I hadn't had that tape, my reputation, marriage, job etc. would have been shot. I want those girls charged!

The police refused so he's brought a civil case against the four and wants $60 000 compensation. Naturally, I hope he gets at least a portion of it to teach them a lesson and that it has to come from them themselves, not from daddy or mummy. It would be nice to see them have to do some community work up to the adjudged amount.

This BBC audio is long but you'll get the idea some minutes in. Do listen to as much as you can because it shows the other side of the story.

Between 3 and 9% of reported rapes turn out to be false after investigation, according to the BBC. I would hazard a guess that it would be far more than that. The majority of perpetrators are known to the victim and 97% of callers to Rape Crisis lines knew their assailant prior to the assault.

In the UK, an unfounded charge remains on someone's Criminal Record Bureau (CRB) file permanently, which can affect future job prospects. Complainants are granted total anonymity on first reporting a rape. According to the 1976 Sexual Offences Act, it is a criminal offence for the media to reveal a victim's identity or any other information that might lead to them being identified.

If they are charged with an offence such as perverting the course of justice or perjury in relation to their complaint they can then be named but there is no protection for those falsely accused of committing an assault.

There is no chance for the man or boy accused. Surely while he is still not proven guilty, he shouldn't get named, just as the girl doesn't. Then, if he's convicted or she's been found to be lying, the guilty party gets named publicly so people can be on their guard in future.

One commenter named Elsa wrote, about this story:

Why in a week in which three horrific men were finally jailed for murdering and raping women, does the BBC decide to run an article and air a radio discussion on the minuscule number of men wrongly accused of rape?

Therein lies the problem - in her level of concern for one gender only. She doesn't give a damn about the falsely accused boys. For her information, the number is hardly miniscule.

In a study that span nine years, sociologist Eugene J. Kanin’s findings were that in the United States, 41% of rape allegations are false. Kanin discovered that most of the false accusers were motivated by a need for an alibi or seeking revenge.

Kanin was once popular and highly praised by the feminist movement for his groundbreaking research on male sexual aggression. His studies on false rape accusations have received very little interest.

These findings are not exceptional. The U.S. Air Force studied over five hundred rape accusations in 1985. More than 130 of the accusers admitted, either just before they took a lie detector test or after they had failed it, that no rape occurred. A more in depth investigation by independent reviewers established that 60% of the original rape allegations were a sham.

Linda Fairstein is the head of the New York County District Attorney's Sex Crimes Unit. She states there are a concerning 4,000 reports of rape each year in Manhattan. Of these, about 2,000 did not happen.

Fortunately, not all women are like Elsa. Victoria Oxley, of Essex, wrote:

I think it is disgusting that girls falsely accuse men of rape. The increase of false accusations of rape make the women who have been raped not want to come forward. Therefore, there are many actual rapists that are still out there, free to attack again.

She really does have a point, you know, about the negative effect on women and girls themselves and how spurious accusations will rebound and make women and girls less safe overall. The stories above have been about young women and the stats on false accusations tend to drop off in the older age group who report rape. For a woman to be raped is something most men can't fully conceptualize and even harder to conceptualize is the difference between consent and rape. We're not talking here about line ball cases like Mike Tyson.

We're talking about where it's pretty clear and after some warning, especially outside marriage. I once spoke with a girl who'd been raped the night before and it was instructive, from the male point of view. My girlfriend tried to explain to me once what it would feel like to have been violated. I should think it would be pretty horrendous, accompanied by enormous anger and severe trauma to the sense of self-worth.

So if it is that horrendous, why then mix it up with lies?

Minette Marrin, columnist and mother with two children, wrote some time ago:

Not long ago my small son burst into tears when his older sister told him censoriously that it is men who do all the bad things in the world; men start all the wars and little boys love pretending to shoot and hurt people.

If you want to know what the prevailing orthodoxy is, you have only to listen to school-children; out of the mouths of babes and sucklings comes all the one-sided propaganda about smoking, rain forests, ivory and fur coats. My daughter's attitude was just a watered-down classroom version of the hard-line feminist view that all men are rapists.

Of course it is not difficult to understand misandry. But it would be a tragic mistake to be as unjust to men as they have traditionally been to us.

Yet that is what women seem constantly tempted to do. In the debate on date-rape there seems, on the part of the most vociferous women, to be a wilful indifference towards men. They seem interested only in female sexuality and perspectives, and to discuss these things in a way that is clearly quite incomprehensible to most men.

There is a simplistic and yet cogent solution which is now maybe too late.

However, no one seems to want that state of affairs so we're stuck with what we have. Therefore, the only immediate relief is in the law adopting the principle of equal anonymity and naming, as mooted above.

For a start, I wasn't in Moscow, a westernized city at western prices but in the centre of the country, in a small city. In those 12 years, I think I heard three times of attempted rape or rape and one of those was a female friend of mine who'd been at my place and insisted on travelling home herself so she took a cab. The man was apparently half drunk and I asked her next day why she'd even got in that cab.

That was rare - and the reason actual rape was rare was perhaps an indictment of that society in other ways. From a man's point of view, there's absolutely no need to rape anyone. I don't know any man over there without a woman - even the hunchback of Notre Dame would have his 'friend'. In the younger set, it tends to be lots of boys and girls mixed up together. So let's say that any urges are quickly gratified and females are not backward in this.

If someone found himself without, then look across the road and there'd be any number you could have, I've heard, for some ridiculously low price. I always thought it ridiculous anyway to pay money for something so readily available but many men seem to avail themselves, maybe for less complications.

Anyway, we're getting off track. The bottom line is that there is no need for rape and if four girls [as in the Edmonton video] had said that, most people, especially the women who know their men back to front, would just laugh. They wouldn't laugh at all the problems they actually do have with their menfolk - the drunkenness, the lack of respect though and in that is a golden lesson if you want a Russian woman - stay in control of yourself and show respect.

And let me add once more that genuine rape is the absolute pits. To use one's power on a woman like that is gutless and unmanly, no matter how many Vikings did it in history. If we can't protect our womenfolk instead of raping them, then we've lost the plot.

Cut back to the west and I shake my head.

Any female I converse with here, she doesn't assume for one moment that it means anything dastardly [although anything's possible if both wanted] but there seem to be a lot of frustrated people round about who do assume it.

After Russia, quite frankly, this amazes me and shows such an unhealthy attitude in this respect, almost creating a paranoia not to go anywhere near a female. We seem, over here, to have lost any sort of normal ability to relate between the genders. I'm sorry but that's how it seems to me.

Since when does talking to a woman constitute "coming on" or "chatting up"? Since when? That's just sick. I'll talk to any woman who wants to talk to me and to hell with seeking anyone's permission and if she thinks this is "chatting up" [which no woman I know does], then perhaps she needs a few years in Russia to get her perspective back. Ditto the men.

What the hell has happened between male and female in the anglo-saxon west?
.
Inflicted on you by James Higham on Thursday, July 16, 2009