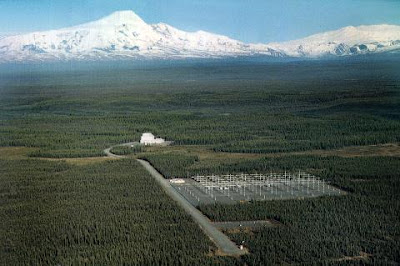 One of the chief difficulties in researching sensitive issues is establishing the bona fides of the sources. For the post below, one source was Dr Rosalie Bertell PhD GNSH who wrote of nuclear fission and electro-magnetic pulses.

That was fine except that clearly, powerful interests were going to wish to debunk her and so we got: “Doctor” Rosalie Bartel is a nun of a fringe splinter group from the catholic church with some very strange views." I looked further and found her degree was from a Catholic college and was for biometry.

Does that disqualify her? Well, to answer that, does it disqualify me that my degree was in linguistics, sub-majoring in "issues in the biological sciences"? Does that negate everything I've written in this blog so far? What of you? Are you qualified to write on politics? Do you hold a degree in political science?

All this began with the news:

As many as 1m people have been left without power in the north-eastern US after one of the worst ice storms in a decade crippled the electricity grid.

"What is facing us is the apparent need to rebuild the entire infrastructure of some sections of the electrical delivery system," Martin Murray, a PSNH spokesman, told the Associated Press.

This led to the train of thought that hey, there's been a lot of freak weather occurring in the last decade and it seems to be getting worse:

In Europe, much of center of the continent enjoys balmy, temperate days. The temperature in Prague set a 230-year record of 13.8 degrees Celsius. Meanwhile, the north has just been ravaged by floods and gales. A weekend storm which raged eastwards from the Atlantic led to the worst flooding in decades in parts of northern Britain.

That sort of thing, along with that tsunami, can lead one to conclude that things are changing, which shouldn't be too hard to prove or disprove, using meteorological records. Also, we should be a bit circumspect at laying the blame at the door of Climate Change, especially as this is a political tool of the elite at this time.

There are certainly unusual things happening. In a recent post, I mentioned my friend in Russia who reports plus ten degrees in Moscow and rain in his home town, when the whole place should be covered in snow - and this is just a worsening of the past few years.

In Britain, one writer commented:

Increasing storminess across the UK will probably mean more frequent storms on the scale of the great storms of October 1987 and January 1990, and indeed March 2008, while the sweltering 2003 summer, which took more than 35,000 lives in the UK and Europe, will be the norm by 2040, and regarded as "cool" a few decades later.

It's not so much the warming/cooling [depending on which camp you are in] but the seeming increase in freak weather which is quite interesting. The BBC published this about 2007 and it appears to have continued into 2008.

[A] picture was reportedly captured on camera by astronomer Dr Jacqueline Mitton near her home in Cambridge last Sunday.

"I've never seen anything like it before - and I'm 60. The conditions have to be just right: you need the right sort of ice crystals and the sky has to be clear. We're not sure how big an area it was visible over, but it was certainly very impressive."

A spokesman for the Met Office confirmed the inverted rainbows are occasionally spotted in British skies.

There are commercial implications as well:

Canadian insurers are warning that climate change is forcing them to re-examine their coverage policies as costs spiral upward from floods, wind storms and other natural phenomena.

This got me to thinking how damned convenient it all was for bodies like FEMA. What's the point of having an emergency body if you have no emergencies? This, in turn, recalled to the memory human intervention in the weather and the cloud seeding prior to the last Olympics are as good a place as any to start down this path:

The idea is for the peasant gunners to work with meteorologists watching radar in the capital. Together, they will hunt pregnant rain clouds and pound them with rockets containing silver iodide. The hope is that any moisture will fall before the clouds can threaten the parade of athletes and lighting of the Olympic flame at the new National Stadium. 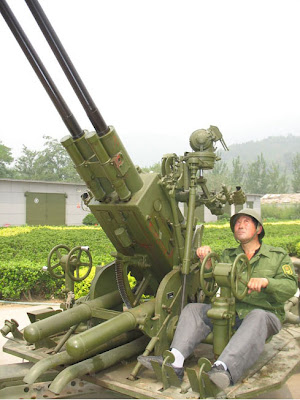 So, if this works for one city, multiply that by the exponential factor required to cover the whole of China, add the coal burning tradition across that country and you have a large question mark about what humans are doing.

Eventually we get to the HAARP and Woodpecker projects, not to be confused with the current HAARP project, addressed further here:

Press releases and other information from the military on HAARP continually downplay what it could do. Publicity documents insist that the HAARP project is no different than other ionospheric heaters operating safely throughout the world in places such as Arecibo, Puerto Rico, Tromso, Norway, and the former Soviet Union. However, a 1990 government document indicates that the radio-frequency (RF) power zap will drive the ionosphere to unnatural activities.

" ... at the highest HF powers available in the West, the instabilities commonly studied are approaching their maximum RF energy dissipative capability, beyond which the plasma processes will 'runaway' until the next limiting factor is reached."

One patent taken out by physicist Bernard Eastlund stated:

"Thus, this invention provides the ability to put unprecedented amounts of power in the Earth's atmosphere at strategic locations and to maintain the power injection level particularly if random pulsing is employed, in a manner far more precise and better controlled than heretofore accomplished by the prior art, particularly by detonation of nuclear devices of various yields at various altitudes... "

"... large regions of the atmosphere could be lifted to an unexpectedly high altitude so that missiles encounter unexpected and unplanned drag forces with resultant destruction."

"Weather modification is possible by, for example, altering upper atmosphere wind patterns by constructing one or more plumes of atmospheric particles which will act as a lens or focusing device ... molecular modifications of the atmosphere can take place so that positive environmental effects can be achieved. Besides actually changing the molecular composition of an atmospheric region, a particular molecule or molecules can be chosen for increased presence. For example, ozone, nitrogen, etc., concentrations in the atmosphere could be artificially increased."

For example, Air Force documents revealed that a system had been developed for manipulating and disturbing human mental processes through pulsed radio-frequency radiation (the stuff of HAARP) over large geographical areas. The most telling material about this technology came from writings of Zbigniew Brzezinski (former National Security Advisory to U.S. President Carter) and J.F. MacDonald (science advisor to U.S. President Johnson and a professor of Geophysics at UCLA), as they wrote about use of power-beaming transmitters for geophysical and environmental warfare.

Carter's Brzezinski wrote of the mindset in the upper echelons which can access this technology:

"Unhindered by the restraints of traditional liberal values, this elite would not hesitate to achieve its political ends by using the latest modern techniques for influencing public behavior and keeping society under close surveillance and control. Technical and scientific momentum would then feed on the situation it exploits."

In effect, it's like the military-industrial complex saying to you, in your home:

"Trust us. We'd never use this technology for military or commercial advantage over our rivals. We're completely transparent and above board. Besides, we have a history of altruism and efficiency, after all."

Researchers have warned of this for some time:

Among other researchers quoted is Paul Schaefer of Kansas City. His degree is in electrical engineering and he spent four years building nuclear weapons. "But most of the theories that we have been taught by scientists to believe in seem to be falling apart," he says. He talks about imbalances already caused by the industrial and atomic age, especially by radiation of large numbers of tiny, high-velocity particles "like very small spinning tops" into our environment.

"One might compare the abnormal energetic state of the Earth and its atmosphere to a car battery which has become overcharged with the normal flow of energy jammed up, resulting in hot spots, electrical arcing, physical cracks and general turbulence as the pent-up energy tries to find some place to go."

Naturally, spin-offs from this include weather control and more pinpointed modification in a given region. None of this stuff is an accident - it's been going on for quite some time. Here I invoke Bertell [mentioned at the start], not for her opinion but for her listing of projects leading up to the current Alaskan scheme:

Though there are undoubtedly fiendish hawks in uniform who see the opportunity of exploiting the new destructive technologies, it is not so much that which will cause the catastrophe but the analogy I read of, of an experimenter sticking a firecracker up a grizzly bear's bottom to measure its effects. The effects could be other than allowed for in original calculations.

It's the arrogance of people labelling themselves the elite playing about with "dial in" technology they have not fully explored, for short term gain and damn the consequences. It's the essential short-sightedness of these grand planners and their incompetence [see Brown's lackeys for evidence of that].

It's the unmitigated gall of playing around with our future and that of our children's children, all in the name of some slick new fashionable scheme which will, as it always has in the past, go sadly awry, simply because what was possible is now in the hands of the criminally incompetent. 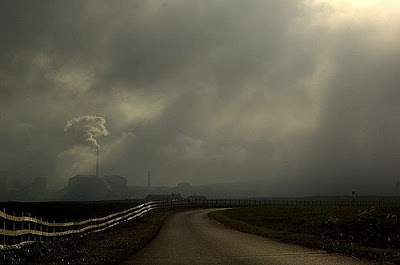 Inflicted on you by James Higham on Sunday, December 14, 2008