Time for action not inaction

Time for action not inaction by the Jailhouse Lawyer

It's the European Court of Human Rights, Strasbourg, France. Once the Court passes judgment on a High Contracting Party, for example, the UK, under Article 54 of the European Convention: "The judgment of the Court shall be transmitted to the Committee of Ministers which shall supervise its execution".

The Committee of Ministers has recently started a new website.

Why might Jack Straw be seeing red right now?

"The Committee of Ministers' essential function is to ensure that member states comply with the judgments of the European Court of Human Rights".

Could it be because I have his nuts in an uncomfortable position? 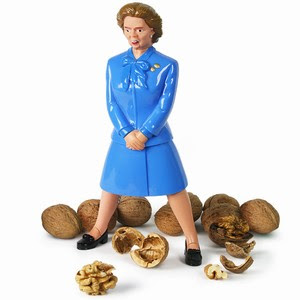 “The Committee of Ministers shall consider any communication from the injured party with regard to payment of the just satisfaction or the taking of individual measures”.

"Individual measures: On 25/05/2004, the applicant was released from prison on licence. He may therefore vote".

I'm alright, Jack. But, what about all those convicted prisoners I left behind in an undemocratic state?

1) The Action Plan: On 07/04/2006, the United Kingdom authorities supplied an action plan for the execution of this case. The UK authorities committed themselves to undertaking consultation to determine the measures required to implement the judgment (written ministerial declaration of 02/02/2006). A consultation paper setting out the principles, context and options should have been distributed and responses to that paper should be collected by September 2006.

Between September 2006 and February 2007, analysis of those responses should take place, and if appropriate, further consultation should take place and the drafting of a second document containing the preferred option and detailed implementation issues. Further analysis should then take place, and if appropriate, the drafting and publication of another document might take place between March and June 2007.

If legislation is chosen as the method of executing the judgment, then the drafting of legislation will commence at that time. Draft legislation would then be introduced from October 2007 onwards, its timing being subject to parliamentary business.

a) The First Consultation Paper: The consultation paper on “Voting Rights of Convicted Prisoners Detained within the United Kingdom” was published on 01/12/2006. It sets out, inter alia, a summary of the European Court’s judgment, the relevant international documents, the practice of the Council of Europe member states and the proposals that the government believes merit careful consideration:

i) retaining the ban (the Consultation Paper notes that this is the preference of some people and the government but recalls the European court’s finding that retaining a blanket ban falls outside the margin of appreciation of contracting states; however, comments are invited on it);

iii) allowing those responsible for sentencing to decide; and

The paper does not set out full enfranchisement as a realistic option, as the government is opposed to it. Proposals were also made specifically concerning prisoners found guilty of election offences and convicted offenders and non-offenders detained in mental hospitals.

b) Information from civil society: It should be noted that on 03/04/2007, the Committee of Ministers received a communication from a non-governmental organisation, the AIRE Centre, under Rule 9. That communication notes that despite the government’s indication that it would engage in a proper debate, it states in the Consultation Paper that it remains wholly opposed to full enfranchisement.

Although the Consultation Paper offers the option of retaining the blanket ban (and welcomed receiving the views of those who agree with this position), it excludes from consideration the possible option of abolishing disenfranchisement of prisoners altogether.

c) The response of the UK authorities: The United Kingdom government recalls that the Consultation Paper did state that views on total disenfranchisement were welcome but nonetheless made it clear, as noted above, that retaining the total ban is outside the margin of appreciation given by the Convention, and is therefore not an actual proposal.

When expressing its belief that an offence serious enough to warrant a term in prison should entail a loss of voting rights while in prison, the government was simply repeating what its position was prior to and throughout the Court proceedings in this case. However, government recognises its obligation to comply with the judgment and has set out a range of options to achieve this.

The United Kingdom government does not interpret the judgment as creating an obligation to enfranchise all prisoners, and has indicated its opposition to such an option, which is why it is omitted from the list of possible options for change in the consultation document. The government indicates that to amend UK law will require primary legislation, and that proposals and resulting draft legislation would be laid before, and thoroughly debated in, both Houses of Parliament.

2) The revised Action Plan: A revised Action Plan has been furnished, which includes a revised timetable. If a second consultation period is required, it would take place from July to September 2007. If legislation is chosen as the method of executing the judgment, the introduction of draft legislation would take place from May 2008 onwards, with its timing being subject to parliamentary business.

The first stage of consultation ended on 07/03/2007, and analysis of the responses is under way. There has been no slippage from the revised plan.

On 25/10/2007, the authorities of the United Kingdom indicated that the government was still considering the responses to the Phase 1 Consultation paper.

• Additional information awaited: Information is required on a regular basis on the progress made in the consultation process and the follow-up to that process.

• Recent development: by letter of 14/04/2008 the authorities provided further information on general measures. The Secretariat is currently assessing this information.

The Deputies decided to resume consideration of this item at the latest at their 1043rd meeting (2-4 December 2008) (DH), in the light of the information already provided on general measures.

By letter of 11/04/2008 the authorities provided information on general measures".

Actually, there are a couple of later developments. On 2-4/12/2008 the Committee of Ministers further visited the case of Hirst v UK (No2). And, Jack Straw sat right down and wrote himself a letter.

What the government called "The Action Plan" and the Committee of Ministers used the same language, in my view, amounts to nothing more than an inaction plan!

Under Rule 9.2 of the Rules of the Committee of Ministers for the supervision of the execution of judgments and of the terms of friendly settlements:

“The Committee of Ministers shall be entitled to consider any communication from non-governmental organisations, as well as national institutions for the promotion and protection of human rights, with regard to the execution of judgments under Article 46, paragraph 2, of the Convention”.

Both Gordon Brown and David Cameron have stated that a battleground for the next General Election will be the Human Rights Act 1998. As this is my territory, I am happy to do battle on this ground. Whilst they both try to woo the editors of the Sun and the Daily Mail, they have forgotten something. The US Secret Service responsible for bodyguarding the President and President Elect are not concerned with the editors of tabloids. What they fear most is the lone assassin.

One of the arguments the government put to the Grand Chamber, is that convicted prisoners should not have a say in politics and who should govern the country. However, irony of ironies, "Prisoners may hold the key to the legal validity of the next General Election, the Joint Committee on Human Rights (JCHR) concluded in its Annual Report published on 31 October 2008".

Today I was speaking on the phone to Duncan Campbell (Guardian journalist), and I said that Jack Straw is embarrassed and does not know which way to turn.

I then asked the question, "Would he be more embarrassed if he had to press to get a law passed by Parliament to allow convicted prisoners the vote, or if he had to explain to the taxpayers why thousands upon thousands of prisoners are to receive millions upon millions of their pounds as compensation for being denied the vote?

He said he felt that the latter would be more embarrassing.
Inflicted on you by jailhouselawyer on Monday, December 15, 2008