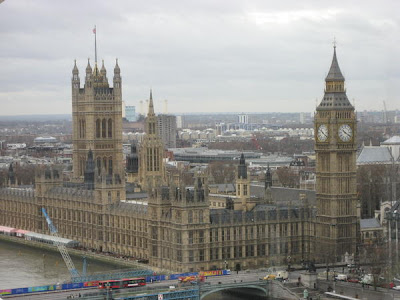 During the bust of '98, I was in Russia and one of the measures was a radical revaluing of the currency by renaming.

So if you had 1 000 000 roubles in your pocket, this was now 1000 roubles and against the dollar, the rouble went from 6.7 to 32.4 which, though still artificial, at least gave the basis of coming out of the recession. Another measure was the reintroduction of coins and the necessity to buy almost all goods and services in roubles, in an effort to kill off the dependence on the hard currency of the time, the dollar.

Needless to say, people still kept dollars in the shoebox on the top shelf of the cupboard but radical solutions in that case did work and the restructuring of the country did begin.

Radical solutions can work if:

1. both government and people want them to;

2. there is no prior agenda which takes precedence over this desire.

If Gordo really wanted to save Britain and get the people back to work and if he had some vision, he'd:

1. write off the bulk of people's credit debts forthwith;

2. remove credit cards from those who were still sub-prime after that;

3. radically rewrite house and other unit costs to reflect a formula on items which cost over one year's median salary, e.g. an average two bedroom house would cost 5 years median gross salary, a car would cost 2 years and so on;

4. begin dismantling the apparatus of state and repealing the ridiculous laws in minor and petty things involving people's personal lives;

5. bring in a flat tax of 12% plus an NI contribution of 2%, mainly for pensions and certain free services for the needy, e.g. pensioners;

7. issue the pound as treasury notes against some commodity, e.g. gold and then demand that reserves be kept by the state run Bank of England;

8. give England its own assembly in a traditional group of buildings somewhere in London;

9. formally depart the EU and operate as Great Britain, comprising England, Scotland and Wales, each with its regional assembly;

10. return Ulster to Ireland, on condition that Ireland was part of a greater confederacy of the British Isles [an economic and trade term];

11. remove the CCTV from around the nation and demilitarize the police, returning them to the beat and offering pay and conditions which would show the force as an attractive career move;

12. put commissioners into education, law and medicine who will return the systems to the values and practices of former decades;

13. encourage family values, the return of the pub [by tax concessions on low alcohol items such as beer] and army cadet training in Years 9 to 11 at school;

14. remove the insistence on NVQs and allow firms to determine their own staffing.

He'd also go down in history as the statesman who returned the monolithic EU to the benign EEC, with whom Great Britain would fully trade, along with the rest of the world. This would return Britain to a position of near parity with the U.S.A., making that alliance a formidable counter-balance to the rising hegemony of China.
Inflicted on you by James Higham on Wednesday, December 24, 2008