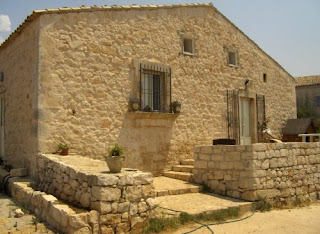 You’d be forgiven for concluding from the previous post [given that you were at all interested in the first place] that the luncheon today was going to be dire.

Already with memories of Welshcakes’ midnight pork, bacon strip and gherkin rolls, the remaining portions dipped into afresh this morning, we waited for the car to arrive to collect us.

The red Fiat Panda, driven by the student daughter, promptly arrived only 30 minutes past the appointed time; the free form jazz she was playing through the Blaupunkt which she turned up full blast through the rear speakers beside my ears in the back was nevertheless pretty talented stuff and the country lane, between the curving dry stone walls either side, was easy on the eyes.

The property itself was situated halfway between our town and the nearby Scicli, set in rolling hills. We turned onto a side road and headed uphill to the park set on a ledge cut into the hillside, a sprawling complex of house and outbuildings, also in the same lightish but cemented stone.

[Referring to the map below now] we went through the archway, the white clothed long table was just being set for lunch and elements of the extended family were here, there and everywhere, introductions being effected as and when.

Now to describe, clockwise, the complex of images coming at us.

Through the archway on the left was the cavernous kitchen-come-all-purpose room with its light-grey tiled floor and wooden tables; in the wall near where we stood was a Madonna set into the stonework; over the main table was a wood pergola; behind the table, up the little hill, was a terraced garden, each section with its own little stone retaining wall and to the right of that – the steps up the hill towards the yard.

Immediately beyond the main table was a cherry tree in a large tub and various other flora. To the right was the entrance to the little house, presumably where the grandparents or someone lived.

There is no tradition of bringing drinks to guests, even in 40 degree heat but one of the chaps took pity on Welshcakes and me and brought a bottle of mineral water so that was all right. Slowly, the guests arrived and the greater family now joined us, setting places and chatting and a nice crew they turned out to be – warmhearted and friendly. 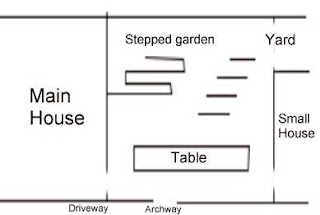 At this point it would be as well to mention the underlying anarchic and chaotic nature of the Sicilian – it can be seen from the way dishes emerge in no particular order, through to the architecture and landscaping – nothing is even and levelled, everything can be a surprise. Overall, the effect though is pleasant and refreshing, certainly in an exercise like this luncheon.

The food began to emerge.

That’s more Welshcake’s department than mine but I can tell you the first thing up was an enormous pie of chicken and some sort of chicken mash, with a large pan of spicy rice and a fresh green salad as accompaniment.

Now came the white wine and it was quite delish. Outside was close to 40 degrees but where we sat could not have been over 28 or 29, with all the foliage everywhere. There was also an electric “bug zapper” in operation and highly effective it was too.

With me thinking it was all over, they now brought large bowls of what looked like stew in a tomato concoction but neither of us could have eaten much more at that point.

With me once more thinking it was over, they started distributing almonds and the wine changed to possibly the finest Muscat I’ve ever tasted and now it certainly looked like it was all over.

Now came the local chocolate, various sweetmeats we’d brought and some other coconut or pinenut things plus the coffee. Surely that was it?

Now came another round of Muscat and nuts, followed by the bringing of the sweet plums, apricots so juicy one could have cried and watermelon everywhere.

The host now came up nervously to check if he’d provided enough and the hostess did the same some minutes later.

Eventually we were given a lift back to town and that was The Sicilian Luncheon. Sicily is not a particularly rich area, in financial terms, for the average person but it is certainly rich in culture, food and human warmth and that showed through today.

Hopefully this post added to your own recollections of the area and brought back fond memories. For the rest – get down here and join us. 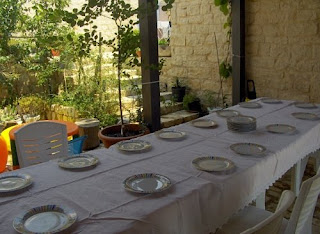