I finished my finals on Friday. My family came to Madrid for the weekend and sadly missed out on quite a bit, being too jet lagged to see anything remotely cool like the changing of the guard at Palacio Real or actually going inside the Cathedral of Our lady of Almudena (we just stood outside and took a photo of the statue, my aunt from Argentina absolutely wanting a photo). Now that I only have to teach English and nothing else, I´m always out and about in Madrid. Today I went to the Telefónica building on Gran Vía and saw an exposition of photos. I was hoping to go into their museum which has many old school telephones including the one used by the king to innagurate Madrid´s phone system but it´s closed till August. I then went to Chamberí.

Chamberí is a neighborhood in Madrid and also has a cool exhibit: an old station from the Metro system dating back to 1919 (when Line 1 was innagurated). Specifically Line 1 (where I live off of) is the oldest of the entire system, something I didn´t know till today. I didn´t bring my camera with me but I found some very decent photos of it on the Internet. Enjoy!

This of the excavation of the station. It was closed in 1966 and in 2006 the process began to recover it. Once you get on the platform for the trains you can actually watch the current line 1 trains go by! I was so thrilled when a friend told me a few months ago that you can go in this station. I have been dying to get photos/get in ever since I moved to Tetuán back in February.

Here is probably the coolest photo I found. This is when your standing on the platform. Notice first off the ever famous Metro de Madrid diamond denoting what station it is (in this case, Chamberí). It´s in the old style too, compare it with the one below Quevedo, which is more recent. Second, it has one of the ads that is down in the station, they retained the original advertisements. Third, off to the right, there is one of the current line 1 trains passing by. I waved at everyone, with my sunglasses on and my university t-shirt. It passes by at normal speed, so I´m sure everyone was thinking, "What is this?" 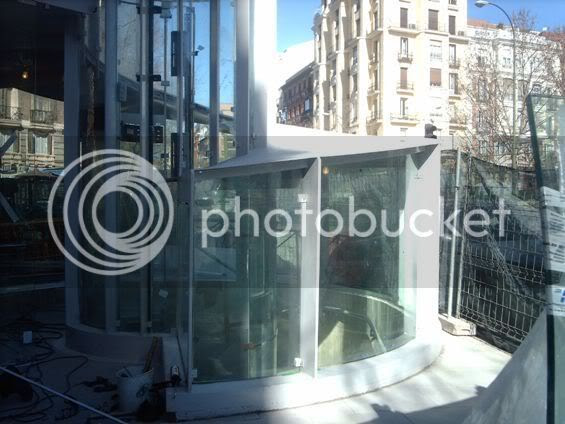 This is the entrance to the station. Find below a photo of the diamond from Quevedo.