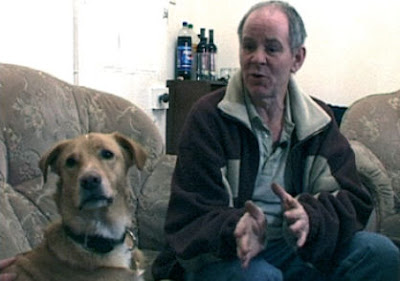 I think public speaking is different from talking to people via a blog. I can and do speak to people, and listen to what they have to say. Even if I would rather not listen sometimes. Particularly if they are shouting and/or being abusive either to me or to others.

I think a public speaker must be able to speak down a heckler. Or laugh it off and continue with the speech undaunted.

I prefer one to one conversations or with two or three others.

This afternoon I spent about an hour or so with dogtrainer@talktalk.net. He came to do an assessment of Rocky for the court.

However, it is being alleged that he was dangerously out of control. And, the CPS is seeking a destruction order for Rocky. For me, they are seeking to award me with an ASBO. It is alleged I committed an assault at common law by telling Rocky to bite a Park Ranger.

I have read prison reports that alleged I was, at times, anti-social. And others describing me as a psychopath. After 23 years in prison, some bright spark decided to test me for psychopathy. I failed to make the grade. I wasn't a psychopath.

One day in prison c.1983 I was in Principal Officer John Burnett's office engaged in wordplay with Chief Officer Eddie Stoker. He was getting redder and redder as he argued away with me, and angrier and angrier, when I had tired of playing with him I said "Anyway, I'm supposed to be a psychopath. What's your excuse?". John Burnett clasped his hands over his mouth and ducked his head under the desk so the Chief Officer would not see him laughing.

Now, I no longer had that excuse to explain my behaviour.

Did I need one?

I exist. I am different. I have Autism. The Aspergers Syndrome means I am different. I live with it and manage to get by. I like to walk out of Myhaven and go for a walk with Rocky, and not have any conflict. But life is not always that smooth. I am a realist enough to realise that we don't live in an ideal world.

I once committed the most serious abuse of power. I killed someone. Admittedly, the mitigating factor was the state of my mind at the time of the index offence. This legally diminished responsibility for my act. And yet, the life sentence was not diminished. It was justified according to the authorities on the ground of perceived dangerousness. However, this was at the time of the offence. By the time the case came to court, I would argue that I was not dangerous. But, it was in writing. No less than 3 psychiatrists had written it in their reports for the court. Psychopaths are not amenable to treatment.

Time is a wonderful thing.

A prisoner knows all about time.

At the time I went to the Dog Rescue Centre I was looking for a dog as a companion. Rocky was not my first choice. I liked the look of an Alsation, but the staff said it was not good around small children. My next choice was a Golden Retriever with a lighter than normal coat, but that was reserved. I looked down the line of cages and Rocky caught my attention. He was laid down, yelping or yapping pitifully, trying to poke his paw out of the wire mesh. It was as if he was saying, "pick me, pick me, pick me". I told him, "alright, I'll give you a try".

Rocky pulled on the lead a bit, but other than that I was happy with his behaviour.

Two weeks later, May 15 2005, I did the last of the film shoot with Ch4 News in the morning and went to pick up Rocky in the afternoon. He couldn't wait to get out of there and did not stop dragging me until we got to my car. Once home, Rocky went from room to room having a good sniff around. I sat down on the sofa. Rocky came down the stairs climbed up onto the sofa and laid down beside me and put his head in my lap. He looked up at me, and I think he said "I'm home dad".

Almost 3 years on and there was the incident in Pearson Park with the Park Ranger C*** W*****. Our version of events are markedly different.

Like I said, Rocky was assessed by the dog trainer and he passed with flying colours. However, he may recommend that Rocky has some more training. And, then he assessed me. Perhaps, I didn't do as well as Rocky. That's because I'm different.

There was the time that the Mad Dog of Pudsey gave me a wide berth. He thought I was dangerous. It was mind games. Psychological survival.

The Treasury Solicitor said I was a pain in the arse. Roughly translated it means he found me difficult to deal with.
Inflicted on you by jailhouselawyer on Wednesday, May 21, 2008