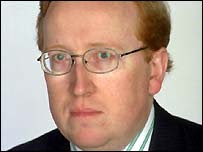 At times, Simon Heffer is a very nasty and aggressive journalist whose efforts invite easy ridicule.
His hatchet job on Boris Johnson immediately prior to to the London mayoral election conveniently omitted to mention his own role in fomenting one of the greatest crises of Johnson's career, and how Johnson's actions might have shielded him from his due measure of public opprobium.

Yet, in yet another of his tedious attacks on David Cameron's apparent lack of ideological purity - the intensity and regularity of these attacks make one wonder whether Heffer is either an obsessive or just another petty authoritarian who'd have gone far on the Committee of Public Safety, one of life's natural park-keepers - Heffer stumbles across a possible key to unlocking public understanding of Gordon Brown.

With a typical lack of charity, he describes Brown as being, "a terminally wounded, uncharismatic introvert with a selection box of personality defects and you start to see the answer. " Indeed - he's from the same mental mould as Richard Nixon.

One doubts whether he cries in front of a portrait of Nye Bevan in the same way Nixon cried in front of Lincoln's; but just about everything else is there. Pity Heffer couldn't make the connection.
Inflicted on you by Martin on Wednesday, May 14, 2008