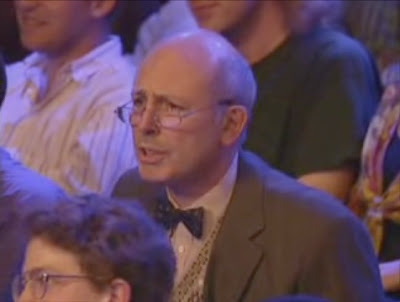 David Harrison, tutor in political science at Warwick University, who illustrates that Brummies occupy the upper echelons of the intelligentsia
There are some appalling things said of the Brummie and this post is intended as a service to non-British readers to help dispel those stereotypes. Wiki begins with a typical fallacy:

A study was conducted in 2008 where people were asked to grade the intelligence of a person based on their accent and the Brummie accent was ranked as the least intelligent accent. It even scored lower than being silent ...

According to Birmingham English: A Sociolinguistic Study (Steve Thorne, 2003), among UK listeners "Birmingham English in previous academic studies and opinion polls consistently fares as the most disfavoured variety of British English, yet with no satisfying account of the dislike".

At the same time, by the way:

[P]sychologists found that the Yorkshire accent has overtaken the Queen's English, also known as received pronunciation, as the dialect most commonly associated with wisdom and intellect.

The BBC has alleged that intonation and rhythm is unvaried and that most sentences end with downward intonation. This can give a false impression of despondency and lack of imagination.

... but what would the BBC know? In an excellent commentary on Brummyism, Sackerson gets down to brass tacks:

First, I think the affected contempt for Brummies is a displaced scorn for industrial labour perhaps impermissible to express so baldly in relation to Yorkshiremen and Lancastrians.

Decades of regarding going into industry as the wooden spoon in life's competition, has brought Britain to our current sorry pass.

There may be a London-centric jealousy because Birmingham is not Britain's Second City, but, technically speaking, its first in geographical area and population.

On the accent, Sackers adds:

My personal preference is Sedgley, an exceptionally musical tone. Their pronunciation of the word "flowers" makes me think there must indeed have been a Golden Age in which men sang rather than spoke.

Some Brummie expressions include:

For some homespun Brummie philosophy, try here. Well that's the accent but what about the behaviour of Brummies? This Alan Partridge analysis throws some light on this:

A fine initiative breaking down prejudice was National Talk like a Brummie Day in 2007 but I'm not sure if Britain is being prepared for a repeat dose in 2008.
Inflicted on you by James Higham on Saturday, May 03, 2008