If you are a regular reader of the Sicily Scene, you know by now that James has landed in one of my favourite places in the world, the island of Sicily or La Sicilia as the Italians say. Just to give you a taste of this wonderful place I am posting here something I wrote about my stay there in 2000 at Taormina, which is not far from where James is now with Welshcakes at Modica. 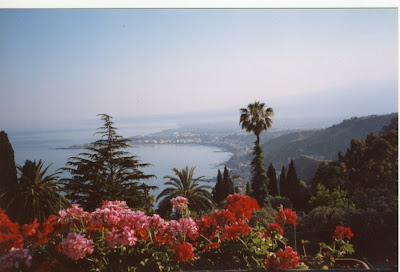 Looking from Taormina, across the Bay of Naxos
Mount Etna in the mist on the upper right
As a longtime italophile and having made quite a few trips to Italy over many years, in 2000 I made my favourite Italian trip to Taormina, Sicily, where I spent two weeks taking an Italian course at the local language school and there I fell in love with Sicily. 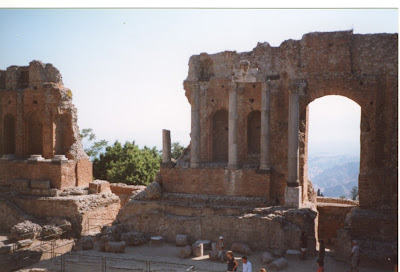 The Greek Theatre at Taormina

This was the second of three trips I have made to Italy to study at language school and to make a homestay with an Italian family. This time my "family" was a little old Italian widow, who was at least 10 years older and I was 65 at the time. She lived in an apartment on the second floor of a building just four doors from the school, Babilonia, so I didn't have far to travel each morning. My room was very spartan, tiled floor, with a single bed, a wardrobe and a small desk. We shared a bathroom and ate breakfast and dinner together at a tiny table in the kitchen. She did have a large combined living-dining room with a huge TV but we only sat in there to watch the odd soccer match for she was una tifosa del calcio, a true soccer fan and sometimes invited me to watch with her. Usually after dinner I had homework to do, so we mainly socialized over dinner.
I think she was quite delighted that I was an older person because usually the students from the school were young girls with whom she had nothing in common. During my first meal in her home she waited on me, but I invited her to eat with me and from then on we always sat together at meals. She was a good cook and we ate well. Lots of fish, often pesce spada or swordfish, a favourite of mine and it was so fresh there. We also had some delightful and interesting conversations in her kitchen.
She herself was not Sicilian, but came from the central region of Italy. There she met her Sicilian husband who was the chef at a large hotel in her hometown and she herself was a member of the hotel staff. He was a widower, older than her and with grown children, while she was in her thirties. They married and moved back to Taormina where he became the chef at a very exclusive hotel and she stayed home and raised her two children. One thing I found very intriguing was that she spoke the dialect of her region to him and he spoke his Sicilian dialect to her, but they never spoke the same language. Somehow, it worked for them. Fortunately she spoke Italian to me, as I do not know the Sicilian dialect at all and those with whom I came into contact in the small town always spoke Italian with me, thank goodness. She had a grown daughter who came to inspect me and I think approved of the fact that her mother had a "student" more her own age for a change. 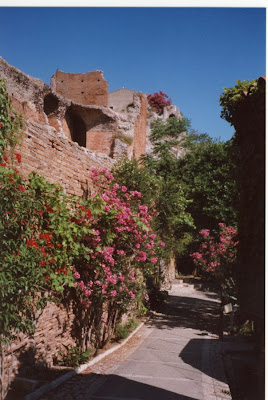 Bougainvillea and oleanders tucked against the wall of the Greek Theatre

Taormina is one of the most beautiful spots in the world, to my mind. Since the early Greeks discovered it as a holiday destination, it has been the favourite spot of many famous people. In 1787 J.W.Goethe discovered the beauties of Sicily and, in particular, of Taormina. He described the beauties of this land and its people and pronounced Taormina a "patch of paradise". The late nineteenth and early twentieth century saw many artists, writers and intellectuals spend time in Taormina, including D H Lawrence.
Perched on the side of Mount Tauro, it has a panoramic view of the Mediterranean Sea with the Bay of Naxos below and the nearby, often smouldering volcano of Mount Etna can be seen from anywhere in Taormina. In fact Mount Etna erupted the day before I arrived and the gritty ash was around for quite a while. I was there in June so it was not yet crowded although it was still quite hot. The streets were narrow and hilly but it was easy to walk around, while dodging the cars and crazy traffic jams.
Language classes were from 9 am to 1 pm and we quickly found favourite spots at outdoor cafes for lunch or to take a cooling granita, in the middle of the afternoon. We often made side trips in the afternoon, one being to Etna although we could not get very near because it was so active at the time. We visited the rocky beach below which you reached via a funicular or cable car and took a boat tour on the surrounding waters. We spent time at the open-aired Greek Theatre which was remodelled by the Romans and explored the stores along the Corso Umberto. The public library, formerly the Church of St Augustine, was a favourite spot for us for it was very cool inside and sometimes we sat in the shade of the trees in the Botanical Garden. One afternoon we climbed the path to the sanctuary of the Madonna della Rocca at Castelmola, a small town higher up Mount Tauro, with even more splendid views of the surrounding area. 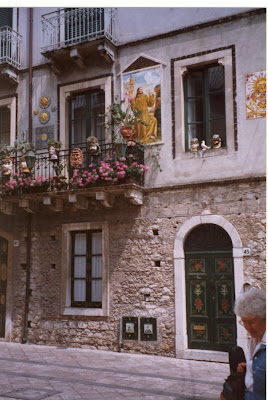 The facade of a house, decorated with ceramics and frescoes and a lovely painted door

So why did I like Sicily so much? The bright light and the blue of the Mediterranean Sea around Taormina were beautiful. There were flowers everywhere, especially the bougainvillea and the oleanders which reminded me so much of Australia that I was drawn to it immediately. In other parts of Sicily where I travelled later, I found eucalypts had been planted, rather disasterously in fact since they sucked up the precious underground water, but this further reminded me of Australia. As always the Italian people were friendly and welcoming and I just felt very comfortable in Sicily and hopefully I'll return there some day.
Sadly my stay in Taormina was before I had a digital camera so my photos are limited. If you have an interest, a very wonderful photographer, Galen Frysinger, has posted many of his photos of Taormina here. These will show you why you should visit this beautiful town should you find yourself in Sicily and of course it goes without saying you should visit Modica which I have yet to do.
I can only say that I am very envious of James and his soggiorno in Sicily. I am sure you will be hearing a lot more about this wonderful place on this blog in the very near future when James gets his act together and returns to blogging here.
We all know how much James loves snow and the cold weather so I do hope the very hot weather of Sicily does not do him in. But then he survived the climate in Australia for a very long time so I am confident that he will enjoy Sicily which will remind him of Australia in so many ways.
Have a wonderful time in Sicily, James. We hope to see you back at Nourishing Obscurity very soon.
Posted in days gone by at Nobody Important
Inflicted on you by jmb on Tuesday, May 27, 2008