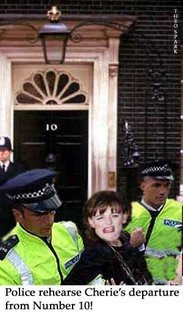 
Martin Kelly leaps into print again with a timely reminder on an LPW:

Some LPW's, such as Marie-Antoinette, achieve the status by being at best misunderstood by, or at worst indifferent to, the people. The late Queen of the French was never guilty of being the bloodthirsty incestuous lesbian she was widely thought to be; other LPW's like, say, Winnie Mandela and Madame Mao, might have a slightly harder time beating their respective historical raps.

Mrs. Blair joins the club for no other reason than that she has thought herself and her doings to be of some interest. Whether this has been motivated by vanity, or just the simple character fault, common amongst lawyers, of not knowing when not to talk, is anyone's guess; and it seems to have been a gross mistake against taste and good sense.

However, the apparent peculation and lack of discretion she has broadcast at the top of her voice, from a mouth as wide as the Mersey, show her to be not unlike the LPW she succeeded as the New Girl in the Club.

That was Hillary Rodham Clinton. Just a thought...
Inflicted on you by Martin on Tuesday, May 20, 2008