[penitentiaries] big business in the states 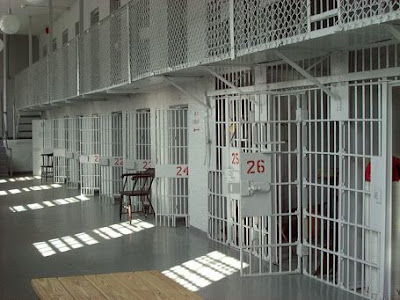 First, the other news in the U.S.:

"While one in 30 men between the ages of 20 and 34 is behind bars, for black males in that age group the figure is one in nine." The total of 2.3 million adults held in prison - or one in every 99.1 adults - puts the US far head of other countries.

China, with its far greater population, has 1.5 million people behind bars, and Russia has 890,000.

China executes increasing numbers of its naughties and not-so-naughties, using the new death buses. The question is, of course, why the U.S. seems to want to incarcerate a sizeable proportion of its citizens in penitentiaries.

One brief aside might help explain - the Executive Order 12656 of 1988 “Continuity of Government” (COG), which, if you read it, provides measures for the legally elected government to remain alive and in power should there be any disaster "natural or man-made". Part of this deals with incarceration of those not acting in the interests of "the nation".

In a similar vein was Rex-84 Alpha Explan whose source I can't find but it's partly supported by Wiki:

The Rex-84 Alpha Explan (Readiness Exercise 1984, Exercise Plan), indicates that FEMA in association with 34 other federal civil departments and agencies conducted a civil readiness exercise during April 5-13, 1984, in coordination and simultaneously with a Joint Chiefs exercise, Night Train 84 (including Continental U.S. Forces or CONUS) based on multi-emergency scenarios operating both abroad and at home.

Rex-84 Bravo, FEMA and DOD led the other federal agencies and departments, including the Central Intelligence Agency, the Secret Service, the Treasury, the Federal Bureau of Investigation, and the Veterans Administration through a gaming exercise to test military assistance in civil defense.

So there appears to be a need not only to expand correction facilities across the nation but to provide instantly transportable facilities to meet any citizen insurrection which might arise for some reason. A logical constructor of such transportation might be Gunderson, who have experienced a great upsurge in their business in the last decade or so.

Gunderson watchers have alleged the construction of boxcars with "shackles" and even a guillotine at one end of the car but Gunderson has countered by offering $1000 for anyone who can provide a photo of such a car. There are photos circulating, such as this one:

... but detractors say these are simply vehicle shifters. The point is that it's not going to be proven one way or the other until they are rapidly adapted to their new purpose ... or not.

All this still doesn't seem sufficient reason for the explosion in penitentiary building but this gives an insight. It refers to a Prison-Industrial Complex which is expanding prison facilities as rapidly as humanly possible:

It is composed of politicians, both liberal and conservative, who have used the fear of crime to gain votes; impoverished rural areas where prisons have become a cornerstone of economic development; private companies that regard the roughly $35 billion spent each year on corrections not as a burden on American taxpayers but as a lucrative market; and government officials whose fiefdoms have expanded along with the inmate population.

One name which always comes up in this connection is Kellogg Brown & Root, a Halliburton subsidiary and some dire things have been alleged about them, presented as "facts". One such is Camp Six:

The 200-bed compound, known as Camp Six, is expected to cost $24 million and will be the base's second permanent prison structure. The first, a 100-cell, super-max style facility known as Camp Five, opened in April.

Together, the two structures represent the future of Guantanamo Bay, which is being retooled to house those prisoners found to pose a continuing threat to the United States.

"If your threat level is high and your intelligence value is high, you're probably going to live here for awhile," says Army Brig. Gen. Martin Lucenti, deputy commanding general of the joint task force in charge of detentions at Guantanamo Bay.

Some of you will recall Kellogg, Brown and Root in connection with the four Blackwater operatives killed in Iraq:

U.S. Rep. Chris Van Hollen held up a copy of Blackwater's contract, which said Blackwater was ultimately working for the Army's main contractor in Iraq, Kellogg Brown & Root, with two companies in between.

The Army and Kellogg Brown & Root denied in a letter that Blackwater had done any work for them.

To be profitable, private prison firms must ensure that prisons are not only built but also filled. Industry experts say a 90-95 per cent capacity rate is needed to guarantee the hefty rates of return needed to lure investors.

Prudential Securities issued a wildly bullish report on CCA a few years ago but cautioned, "It takes time to bring inmate population levels up to where they cover costs. Low occupancy is a drag on profits." Still, said the report, company earnings would be strong if CCA succeeded in ramp(ing) up population levels in its new facilities at an acceptable rate".

Roughly half of the industry is controlled by the Nashville-based Corrections Corporation of America, which runs 46 penal institutions in 11 states. It took ten years for the company to reach 10,000 beds; it is now growing by that same number every year.

CCA's chief competitor is Wackenhut, which was founded in 1954 by George Wackenhut, a former FBI official.

Just to reiterate part of that: "time to bring inmate population levels up to where they cover costs" - there is a scenario where the prison industry is big business, where it's necessary to rapidly increase prison populations to meet costs, there appear to be a large number of convertable, deployable boxcars, an expected civil threat in the near future and the ever present current threat of terrorist attacks.

Meanwhile, here is something to occupy the kiddies whilst mummy and daddy are being processed:

It's a good thing that state mentoring is expanding at the same time, to fill the gap left by unsatisfactory parents. Wickedly inaccurate conclusions? Fear-mongering? You can draw your own conclusions, as is your wont.
Inflicted on you by James Higham on Saturday, March 01, 2008