[micro-control 4] some eu plans for england and beyond 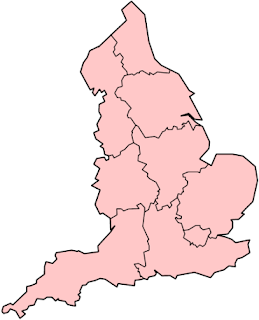 The disintegration of privacy within the sphere of the EU comes next post. This post just restates many things already known vis a vis England and might disappoint, in that it presents not a lot new.

So, first up, we're all agreed, aren't we, that the EU has England broken into nine administrative divisions, as seen on the map above? The only question is, post-Lisbon, when precisely this starts.

These nine regions, along with the Scottish and Welsh regions, have already entered the educational field both at senior level and junior as the current situation.

Further information is available here, here, here, and here, just to post a few. [Some government site links might not now work as they have been progressively deleted.]

Each region is a discreet adminstrative area with its own assembly already in situ, ready to activate. This much is easily accessible from government docs on the web. Winston Leonard commented, on October 15th, at my site:


You have to remember that the Foreign and Commonwealth Office will disappear under the EU Constitution, with Brussels dealing with Foreign affairs, policy, and overseas embassies. In all probability, the Senior official concerned will be the one relocating to Brussels in 2010.
Same rule would apply to International Development, another area that will lose out to Brussels. So who will relocate? Malloch-Brown, or Milliband, or both?

The move to regionalization needs to be pretty well completed by post 2009 and it can be better observed in local issues, rather than at the national level, for example, on roads:


The new plan will be to let local governments price or otherwise regulate their bits of the road network as they see fit. So far the main example of this is the London congestion charge, which is enforced by using controversial Automatic Numberplate Recognition (ANPR) technology to track vehicle movements.

Predictably, in the wake of recent clownish "carbomb" attempts, the government has granted terror police routine access to the London tracking system. This has confirmed the widely-held view that no matter the initial purpose of any vehicle-tracking technology, it will swiftly become an automated surveillance tool.

Naturally, once the populace is aware of what is happening, there will be a great deal of unrest - the blogosphere transferred to the general community but this has been factored in. An example is Lisbon itself:


Poland also wants to make sure that the charter of fundamental rights, which guarantees the right to strike among other measures, cannot apply in domestic courts. This is an opt-out already secured by the UK. Some in Brussels have questioned its legality but David Miliband, the British foreign secretary, termed it “silicon-sealed”.

The aim is to have the reform treaty ratified by all 27 member states ahead of elections to the European parliament in 2009.

To enforce both it's "entity" as a continental bloc and to snuff out local dissent, the Merkel initiated pan-EU militsia is already in training. And translated from the original here:


It will be the opening day of the command of Central European Gendarmerie (Eurogendfor), intranazionale new force established by the European Union in order to carry out "police missions in operations of crisis."

They'll naturally need some operational theatre of war for training so:


The EU is to examine the possibility of deploying a 3,000-strong force to Chad to contain spill-over from the Darfur conflict in neighbouring Sudan, foreign ministers agreed on Monday.

The litmus test, it seems to me, is whether you can believe the word of the EU. Ellee Seymour throws some light on that here, referring to Mandelson’s reneging on ACP trade agreements in favour of regional agreements.

Do read the whole piece to get some sort of idea how you feel about EU transparency and honesty.

Those whio have not already sighed and clicked out might be interested in one take on what the eventual plan entails. I don't mean the EU-ization of what was once Britain but the overall plan.

This is as good an article as any but the heading summary below does not do justice to the full explanation given at the site. Again, do read the whole thing. The process goes something like this:


1st Signpost: The Registration of Populations

2nd Signpost: The Creation of a Global Identification System

3rd Signpost: The Creation of an Infrastructure for the Global Surveillance of Movement

4th Signpost: The Creation of an Infrastructure for the Global Surveillance of Electronic Communications and Financial Transactions

5th Signpost: The Convergence of National and International Databases

6th Signpost: The Spread of the "Risk Assessment" Model

7th Signpost: Security-Force Integration and the Loss of Sovereign Checks and Balances

Do you think this has gone off the deep end? Well, let me go further. The type of incompetence revealed by Dizzie in the losing of 15 000 personal records by courier I simply do not accept as accidental. Please see part 2 of this series.

Inflicted on you by James Higham on Sunday, November 04, 2007