Ken Livingstone's old jibe about pigeons being "rats with wings" is a disgrace to the memory of the hundreds of brave pigeons who went through shelling, trained killer-hawks and countless other vicissitudes to deliver the message and save our heroic men and women in the last conflagration.

Since Roman times the pigeon has come to the aid of man:

In the Siege of Paris in 1870, as the Prussians advanced, a balloon called de Florence sent off three pigeons at .m. They were back, mission accomplished, by 5 p.m.

Another, Cher Ami saved the lives of the 77th Infantry Division's "lost battalion" at by delivering 12 messages and returning to his loft with a shattered leg after he was shot. He won the Croix de Guerre with Palm and died in 1919 as a result of his wounds.

Their uncanny ability to home has been speculated upon since time immemorial.

Of course you're all familiar with Hagstrum's hypothesis on the Great Pigeon Debacle of '97 [known in pigeon circles as "The 97"] which proves, beyond a shadow of a doubt that climate change is real, that women are more receptive to male advances in direct proportion to the amount of outlay for the evening and that pigeons navigate by some sort of ultra-sound.

US Geological Surveyer, Jonathan Hagstrum, in studying this event, noticed [that when] the racing pigeons were crossing the Channel, the Concorde was flying along the Channel also. In flight the SST generates a [downwards] shock wave, a carpet of sound almost a hundred miles wide. The racing pigeons flying below the Concorde could not have escaped the intense wave of sound. He concluded that the pigeons who did make it back were the slow-coaches who missed the Concorde.

A heroic pigeon did a swan dive into a New Lourdes swimming pool and pulled a drowning 2-month-old baby by her hair to her hysterical mother poolside. Ms. June Carroway stated: "I was frantic, but I couldn't save her. I can't swim either." The pigeon made sure the baby was lifted out of the pool by her mother and then flew away.

Many know of the decisive statement made on George Bush's jacket on the White House lawn by the sparrow pigeon, Le Dump, who eluded radar, concealed snipers and security men, causing apoplexy to Dick "Fire-at-anything-which-moves" Cheney.

One would think that, with such a long and distinguished record of service, a slight rear end faeces retention design problem, unfortunately resulting in "combined deposits up to several tons a year and costing £15 million to clear up", might be overlooked by the killjoys.

I took my pack and ticket to the requisite platform, where I sat on a bench and passed the time watching the station pigeons. They really are the most amazingly panicky and dopey creatures. I couldn't imagine an emptier, less satisfying life.

Here are instructions for being a pigeon:

1. Walk around aimlessly for a while, pecking at cigarette butts and other inappropriate items.

2. Take fright at someone walking along the platform and fly off to a girder.

Oh yeah? Well let me tell you, Mr. Bryson, that:

have proven that feral city pigeons do not wander about aimlessly among hurried pedestrians but are actually dancing with them. Biology student Jervis Mason stated: "I spent 4 days observing them in a downtown crossing and studied their behavior carefully. The patterns they follow can only be the pigeon version of the Square Dance."

Admittedly they do sometimes get a little out of line but I ask, open-armed, who doesn't?

A gang of marauding pigeons held up a Bubble Creek convenience store and made off with $567 in cash and a package of Armour hot dogs. Said dazed clerk Annie Costello, "At first I thought they were punk kids dressed up like pigeons, but then I realized they were too small to be kids."

But that's no reason for Uberfuehrer Livingstone to pursue his campaign of persecution on the poor homeless pigeon who needs our love and care if we'll only give him a chance. For goodness sake, not content with banning their feeding, consigning them to agonizing deaths from enforced starvation in Stalag Trafalgar:

The mayor's attempted coup de grace came when he hired two Harris hawks to patrol the skies. The opposition Liberal Democrats have criticized the program. The hawks have cost taxpayers since 2002, while killing an estimated 121 pigeons, the party says.

To the rescue comes:

Lowestoft Council, who are driving birds away from residential areas to specially built feeding and breeding areas in less sensitive places. So has the pigeon problem been solved? certainly have had successful results with the designated breeding areas.

Oh what a sad and sorry tale for the poor rock pigeon. Is there no end to the depths of depravity the ingrate humans will inflict on our feathered allies?

A plea by Walt Pigeon

Rise up and hear the bells;

For you they call, the swaying mass, their eager hands a-feeding; 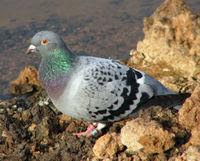 It's his dream that on the square,

Inflicted on you by James Higham on Thursday, August 02, 2007