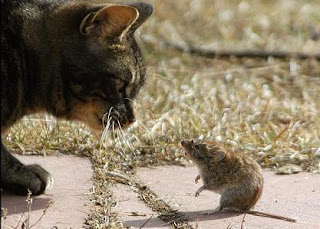 Which one are we?

I tell you it's induced, I've spelt out the agenda in many posts and I state further that this is a trial run just now. Who baled the banks out this time?

A credit crunch has been averted with the help of world banking 'super-friends', but stock-watchers are divided on the wash-up.

The Fed promised to provide whatever funding was needed to ensure that banks were able to continue lending to each other at its desired interest rate of 5.25 per cent and pumped $38bn (£18.8bn) into the system in three separate open market operations.

Yet at the October 25th FOMC it was noted that:

The President recently signed the Financial Services Regulatory Relief Act of 2006, which gave the Federal Reserve discretion, beginning October 2011, both to pay interest on reserve balances and to reduce further or eliminate reserve requirements.

This amounts to the most extensive liquidity support operation undertaken by the US central bank since the 9/11 terrorist attacks and follows similar steps by the European Central Bank and Japanese central bank in the past two days. Among the main central banks, only the Bank of England has declined to inject extra cash into the markets.

In layman's terms, the problems are soft GDP, rampant consumer debt, sluggish housing market and inflation. Even a non-economist can draw conclusions from that.

Now, add to that the factor of [hat tip Wolfie]:

The Chinese government has begun a concerted campaign of economic threats against the , hinting that it may liquidate its vast holding of US treasuries if imposes trade sanctions to force a yuan revaluation.

Add to that the suicidal consumerism in recent decades, the drop in the real value of the monetary unit against key commodities and the tightening of government control of all aspects of people's lives to an unprecedented peacetime level plus the European "feelers" from Merkel on gearing-up for war and the surreptitious pushing through of the Euro treaty and what have we got?

Above all else, whilst you consider this, also consider who is actually at the helm. Which men and women are actually running the economy? Do you trust a CFR or European financier to act in your best interests, come the credit crunch?

There are therefore a series of recommendations, all but one posted here before:

1] Quietly get out of any credit arrangement within the next two years or any other mechanism where you are in thrall to a financial body;

2] Take legal advice on the status of your private property and ensure the title is secure in your name;

3] In the case of a mortgage, be prepared to have the balance called in by 2012, i.e. be prepared to concede the loss of your property when the 2nd Fed induced crash comes;

4] Therefore have some fallback living facility somewhere, even if it's only a beach house with a garden.

Inflicted on you by James Higham on Saturday, August 11, 2007