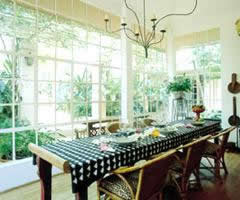 Not my dining room, I hasten to add.

I look around my "new" flat and see the tiny splashes of paint over the bath, the taps on an angle and white chalk from the ceiling ground into every crevice in the parquet floor - impossible to remove except professionally.

Sure the overall feel is better and everyone says how light and breezy the flat now is, how much space there is and then the eyes [usually female] fall on the defects.

They can't believe I "allowed" this.

I suppose it's trusting a workman to be a good workman, almost willing it. Of course I'd been warned that there were certain people who operated на авось - without caring in the least about the result. I'd heard there were people who really quite seriously believed that the money was the only thing and that any sort of job was OK as long as you got the money.

I seriously expected that in a room where painting was going on and the only phone point in the flat was on the skirting board of that room, that the paperers and painters would place something over the phone when they got close to it.

I came back in the room, having gone down for some things from the shop and not only were the phone and all the electrical points clogged in white but the receiver had been knocked off its perch.

I can't believe that a person, even a workman, would have a brain so wired that she would completely ignore that it was there, even having been warned about it.

Or how she could rat-a-tat-tap on a thin pane of glass one metre square with a metal tool to attract her co-worker or would pick up my metal-legged stool and swing it around without noticing how close to the glass panelled living room doors it was.

I also can't believe why I didn't get angry - there's something British in this methinks - wanting to avoid a "scene" perhaps. Shocked to the core by the cavalier and jaunty way the woman continued and when I did mention it, she said it wasn't her who had done it, I didn't know how to counter this.

Plus there is a complicated arrangement with this apartment and it means I have to accept the workmen who are sent and there again I trusted my partner in this matter. When she, after it was all too late, agreed that it had been shoddy and they were going to be docked a certain proportion to cover the clean up, it still didn't make things better.

I don't want those two back in my flat. I'll do it myself. I was never brought up like this. Both my "fathers" were meticulous workmen and I would have challenged anyone to find a speck of dust in my mother's house.

Once, after I'd built a box-fence at my own house, my father came over and cast an eye up and down a job I was proud of and then spotted the defect in the line and how the concrete pouring hadn't been smoothed over in places.

Once after a screen-printing job, my later "father" cast an eye over it and immediately saw the slight run of colour from the stencil. It wasn't the defect, it was whether it was spotted and corrected that counted.

In his final years, I saw my original father painting a cabinet and the job was, quite frankly, like something I would have done. He saw it too and I never recall him painting again.

So every time I see these splashes which we've even tried to gouge out but which have gone into the enamel, it's very, very upsetting.