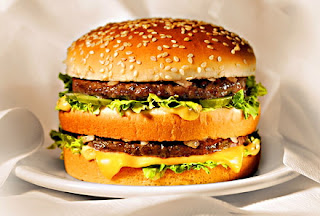 And in cutting edge news from :

There will not be a vast increase in births in this year, compared to 2006, as reported in May. A new computer system at the made the error of counting women who came in for ultrasound twice as two different women. According to Gudrún Eggertsdóttir, the director of the maternity ward, births have in fact decreased since last year.

Well, that's a relief then. But the Big Mac index is of more concern:

That may be so but I remember in Bergen many years ago, even though the the Big Mac meal cost the equivalent of $5.50, it was still affordable and 50% filled you, whereas a Scandinavian open sandwich with a sliver of fish, wipe of butter and a suggestion of lettuce and tomato cost $4 and was gone in two bites, followed by the need to buy a $3 tin of cola to take the taste away.

There was indeed the prospect that to fill up in the evening would cost around $15, using this method or to go into a café/restaurant to have a proper meal was going to set you back some $30, if you were careful and didn't drink anything.