[goddess of reason] whom to believe 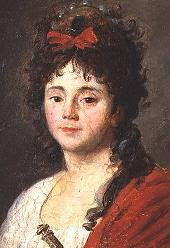 I was preparing another post and came across the story of Notre Dame and how a prostitute supposedly was laid across the altar during the revolution.

First stop was Wiki, which said:

As personification for the goddess, Thérèse Momoro, wife of a printer, was chosen. The goddess was celebrated in Notre Dame de Paris (she was put on the high altar in the Cathedral by the Freemasons).

Now that's rather choice because I wasn't even thinking of having a go at the Freemasons this time. What did strike me though was that the story I knew, of a dancer/prostitute laid across the altar and "extolled as the goddess of reason", now seemed to be a chaste wife of a printer after all.

So I looked around and stumbled on this, from the Catholic Church, which you'd expect to say it:

This is clear from their subsequent action of enthroning on the altar in Mary’s place a nude woman, the Goddess of Reason.”

Also clear was that this required corroboration. I found this:

The in 1793 decreed that on the 10th of November the worship of Reason should be inaugurated at Notre Dame. "On that day the venerable cathedral was profaned by a series of sacrilegious outrages unparalleled in the history of Christendom. A temple dedicated to 'Philosophy' was erected on a platform in the middle of the choir ... the Goddess of Reason, impersonated by Mademoiselle Maillard, a well known figurante of the opera, took her seat upon a grassy throne in front of the temple; ... and the multitude bowed the knee before her in profound admiration....

Mademoiselle Maillard? And this was confirmed here. But Wiki had said: "Thérèse Momoro." Curiouser and curiouser. Then came this:

…just as they’d done to Notre Dame in , where a prostitute—the Goddess of Reason—was stripped naked and laid across the high altar...

Again, officially Catholic and so difficult to confirm or deny. However, it's possible to piece it together with that Reason they were extolling.

The mob was in a mood of mockery. Mademoiselle Maillard was a popular singer, maybe opera, maybe something more Moulin Rouge, [yes, I know it was built later]. There were accounts of mob drunkenness at the time:

Round the choir stood tables over-loaded with bottles, with sausages, pork- puddings, pastries and other meats. The guests flowed in and out through all doors: whosoever presented himself took part of the good things: children of eight, girls as well as boys, put hand to plate, in sign of Liberty; they drank also of the bottles, and their prompt intoxication created laughter.

... and in that atmosphere, she may well have been prevailed on to at least partially disrobe [half-naked], especially if she herself had imbibed a few.

There's nothing new in such outrages, as Caligula could testify:

Alexandrian Greeks had resented the Jews' exemptions, and demanded that Caligula's statue be emplaced in the Jews' Temple in Jerusalem. Riots broke out in support of this in Alexandria, and Caligula, who was engaged in propagating his own divinity in any event, took over the notion, and commanded that his likeness -- tantamount to an idol -- be put in the Temple.

Perhaps the truth lies somewhere midway but one thing quite clear is that the modern scribes attribute the act to a different woman to those of the older sources and play down the debauchery which is apparent in the last quote.

Of this modern scholarship I am deeply suspicious.

And one last thing - why do people descend into debauchery and mob violence when societal constraints are removed or whenever they're invited to? Why don't they march, en masse, to the national library and have a giant "readathon" about Reason?

What force actually moves them, drives them, possesses them to commit outrages?