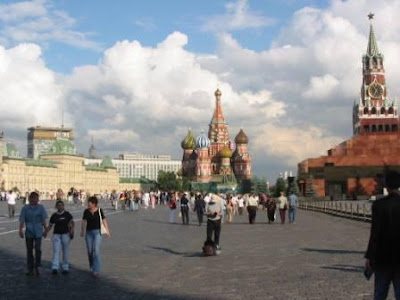 1999
I've been to Moscow twice. I love it because you can get a palpable sense of history visiting the city. The first time I visited was in early 1999 with fellow political blogger Peter Smallbone. It was shortly after the Russian financial crisis and we stayed in the legendary Communist carbuncle known as Hotel Rossiya overlooking Red Square (the prominent building in the background of this pic I believe it has just been demolished). In terms of nightlife, Moscow felt like arriving at a party that had just ended. The city had been hit hard. One day a protest was taking place on Red Square and we realised that the cordon that was in place was clearly to protect hotel guests from the massed crowds of Communists. If memory serves me right the crisis in the Balkans was the source of disharmony. On the first night in Rossiya we went for a drink in the hotel bar which didn't have a happy ending. In our group were a bunch of ex-pro-footballers one of whom we managed to persuade to stay with us for a few shots. We ended up leaving him in the bar, but the next day it turns out that he met a woman in the bar who he didn't realise was charging until after sleeping with her. The incident spoilt his holiday which was a pity.
2002

Next time I visited Moscow was in 2002 and things had changed out of all proportion. Restaurants catering for every cuisine under the sun had popped up and there was a buzz pervading the city. Having a confident Muscovite girlfriend as a guide was another plus. Marina had her own personal driver which was handy on a night out. One night we went to an expensive Georgian restaurant which was quiet following a shooting the week before. They had a house magician who went from table to table. As I was struggling to find some change for his two minute show Marina dropped him a note worth £20. I think that's what he got at the other table, too. It was a moment that sort of clunked. On the same day there had been street protests from government scientists who were demonstrating about their low pay. This magician had just earnt way more in five minutes than they did in a week. Another weird incident was when we went to visit the Kremlin. All tickets for the day were sold out, so of course we bribed a Kremlin guard to get in. The guard had no hesitation in assisting us, but was keen to make sure that we didn't get caught. On the basis that they only check foreigners' tickets he told Marina "As long as your Western boyfriend doesn't smile you'll get in all right!". He was right. I can do sullen Russian.
Inflicted on you by Praguetory on Friday, June 29, 2007