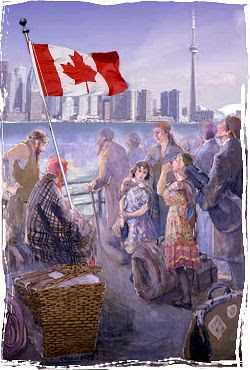 I don't know why, but James has invited me to post something during his blog hiatus. I guess he thinks something is better than nothing, which in my case remains to be seen. Of course he's worried about the retention of his fan base and if I can't keep you here, even drive you to click on, maybe some of the other guest bloggers will perk your interest.

Who am I, you ask? I'm a "little old lady", retired from hospital pharmacy, some years ago. I write a very obscure blog called, Nobody Important, which James has been kind enough to highlight on occasion here. I wrote this post very early in my blogging career and I hope you find it interesting enough to keep on reading.

James wrote a post about Immigration in April and he certainly set the cat among the pigeons, with lots of heated comments as a result. This is a gentler post about my experience as an immigrant.

The fact is that the emigrant and the immigrant are the same person.

The one departs from his homeland with great sorrow and regret, leaving behind family and friends. For whatever reasons he leaves, the sorrow and regret are felt, for this is the land of his birth. No matter that perhaps life there has become intolerable. No matter that perhaps the reasons for leaving are happy ones: to join a loved one in another country; to take advantage of a better job; for a better business opportunity; better education opportunities. There is still sorrow and regret.
The other arrives with great hope and expectations for a better life, or at least a different life. New challenges have to be met, involving jobs, housing, cultural differences, religious differences, language difficulties, maybe even racial differences. To be met with hope and excitement.

I, the Australian daughter of a Scottish immigrant to Australia, immigrated to Canada with my Australian husband, whose father had emigrated from New Zealand to Australia. We came, after a two year stay in England, so that he could take a position as a university professor. We really hoped to return to Australia after two years, however we stayed here instead. We had none of the difficulties faced by so many immigrants. Yes there were minor cultural differences and we used different words for some things, like petrol for gas, but still English words. We settled in immediately.
Luckily for us, since Vancouver is such a young city, even the Canadians we met were from the Prairies or Eastern Canada. Very few people our age had family here, so we became each other's families. We had no one else and we relied on each other totally. The most incredible bonds were forged, maybe even stronger than familial bonds because we didn't have the emotional baggage that many families carried. My family has celebrated Christmas with the same Scottish family for more than 40 years. My friends are Scottish, New Zealander, Hungarian, English, Welsh, Spanish, French, Chinese, German, American, Russian, Czechoslovakian, Japanese, and yes, there are even some Canadians.

We all left our homes and families and settled in Canada. Here we established new families and new friends. Yes we are proud Canadians, but we'll always be Australian, Scottish, New Zealander, and so on. But to my mind, the greatest thing that has come out of this immigrant experience is the tolerance we have learned to have for each other.
Sixteen years ago, my daughter left Canada to do graduate studies in the USA. Ten years ago, she married an Italian who had come to do graduate work there, as she had. They have settled in the States and have a daughter. Where will she finally settle? She has three citizenships, American, Canadian, Italian. Unfortunately my daughter, herself a dual citizen, Canadian and Australian, was unable to pass on the Australian citizenship for technical reasons.
Our immigrant line may well continue into the fourth generation, for this is the reality of the world of today.
Inflicted on you by jmb on Wednesday, June 20, 2007