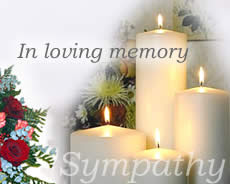 It seems that I have come to that time in my life when I am often a funeral participant. I hadn't been to a funeral in years it seemed, but, in the last year or so, I have had quite a few opportunities to be a mourner. With the exception of two very close long time friends, most of the departed were not close friends but my connection with them demanded a show of respect and an appearance at the funeral. Some of them were quite elderly and not well and the sorrow was tempered by the fact that they had led long satisfactory lives. On the other hand, some of them were the same age as I and this was sad for me, while some were considerably younger and this was indeed tragic.

It seems that certain things have changed at funerals since I last attended one. For example, there is usually a large photo of the departed displayed prominently. Sometimes it is a portrait of the person and sometimes a happy family group and often there are informal collages of photographs at the reception. The flower arrangements are simpler nowadays with many families requesting no flowers, but donations in lieu to the charity of one's choice.
But the innovation that I like best of all, is the PowerPoint musical slide-show presentation that is almost the norm now at funerals. True celebrations of a life, displayed for all of us to see what a fine life this person has led. Since I am an immigrant, I met most of these people as young adults or even middle-aged individuals. So I discover all these interesting things about their early lives that perhaps I didn't know before, that they had never told me. I love this part of the funeral and I am disappointed if there is none. The eulogies by friends seem to have become less formal, with funny stories being told so that there is joy in the atmosphere as well as regret. Now many people want to speak at funerals and sometimes they are very long. The funeral for my dear Hungarian friend, who died this past year, was two and a half hours long, since so many people spoke. There I found out he had been shot during the 1956 revolution, which I hadn't known previously, although I had known that he was part of it and escaped later.

Just over a year ago I gave the eulogy for a very close Scottish friend. It was a memorial service and since she had died at Christmas, it was held in early January. I wrote my eulogy and was terrified that I would break down and cry in the middle. However two days before I developed viral bronchitis and my voice almost disappeared. No one would agree to read the eulogy for me, so I was forced to croak away into the microphone and was concentrating so hard on speaking that I did not lose control until the last.
If you knew me, you would know that I am a micro-manager and always have to do everything myself with lots of double checking involved. So I keep thinking that I should prepare my own funeral celebration. I know which photograph I would like enlarged, a simple candid shot taken when I was about 50. It's my favourite photo of myself. I'm not photogenic at all, I fear. I have already asked a friend's son if he will play Amazing Grace on the bagpipes for me, but hopefully it will not be for a long time. I don't know much about PowerPoint but if I can learn blogging I can learn PowerPoint. So I'll have to start looking through my photos and borrow PowerPoint for Dummies from the library. After all, I want my mourners to enjoy my funeral presentation as much as I have appreciated the celebrations of life that I have attended lately. 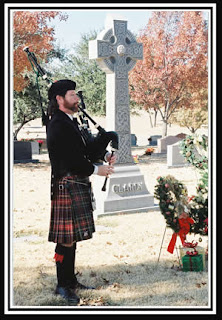 The bagpiper is Jimmy Mitchell, from Texas, who plays Amazing Grace at funerals.
This is another early post from my blog.