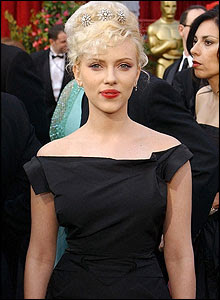 Scarlett Johansson has recently been called in by former Vice-President Al Gore to help him promote his Live Earth day, this follows hot on the heels of an announcement that Miss Johansson, most famous for her acting and for being according to some the most attractive woman on the planet, was recently appointed to a role as ambassador for Oxfam in India. No doubt Miss Johansson will give Mr Gore's efforts to stop climate change (a matter I know of dispute within the readership of this blog, but that's a debate for another day) and the efforts to help the poor of the world, a touch of glamour and style that may tempt some more people to discharge their pockets in a beneficent gesture of charity.

There are a couple of obvious issues to do with this kind of celebrity endorsement of things- firstly it leads to an uncomfortable situation where celebrities are effectively sifting for us the charities that we should be interested in. But of course they have no more expertise in doing that than anyone else. Miss Johansson to her credit is a very good actress and in films like The Man who wasn't there, her performances create characters who are very interesting. But that doesn't make her an expert on development studies or environmental science- having said that many of our decisions in politics are taken upon an ignorant basis- for example many people in the 2008 election for the US Presidency will be considering Hillary Clinton's behaviour in the 1990s, Rudy Giulliani's divorces, John McCain's age and Mitt Romney's flip flopping as well as their positions on the levels of income tax over the next five years.

There is something though that I object to just as much going on here. Miss Johansson is a very impressive actress but she is also a very rich woman- as is for instance Bob 'Give us your f***ing money' Geldoff. I work on a budget of around spending ten pounds a day at most- if I give a fiver to a beggar or a fiver to a charity, that's half my day's budget gone. If Scarlett Johansson gives the same amount to a charity, that's a fraction of her income in an hour gone. When Geldoff and Johansson and others get up and start pontificating about the guilt of the rich West and how we should share resources- there is a temptation to ask them well why don't they give enough of their resources away so that they have to live like a normal person. Admonitions to sack cloth and ashes don't come well from those strutting in diamonds and furs!

But I think there is something also going on behind all these celebrity moves into advocacy for charitable groups. Celebrities as many people comment are cut off from society- football players who used to earn the wage of the average manual worker, now earn the average manual workers' lifetime income in a year- actors and actresses now are wealthier than you and I to an extent that even their wealthy predecessors in 20th Century Hollywood would have found remarkable. This isn't a complaint at all- but one of the interesting things about this is that of course it makes the recipients of this largesse feel both guilty and unjustified. Yes probably the charity endorsements are the products of publicity agents- but it also strikes me that when Bono or Bob or Angelina Jolie head off to Africa and say the West is disgustingly wealthy, lets help the Africans, what they are really also saying is that the distinctions between I Bob and you Gracchi are insignificant, we are both disgustingly rich and you should share my guilt and do something about Africa.

I should end this post by saying that lots of celebrities do a lot of good- but I do think its interesting to look at the way that this novel state- being a celebrity- interacts with the high profile use of charity work by many of them- it almost makes being a celebrity into the condition of being a modern saint- recently Angelina Jolie was described by Esquire as being the best woman in the world because of her charity work- I'm almost certain that if I had Miss Jolie's wealth I could give a lot away as well- and I'm almost certain as well that if I did that I wouldn't be the best man in the world either.
Inflicted on you by Gracchi on Friday, June 22, 2007