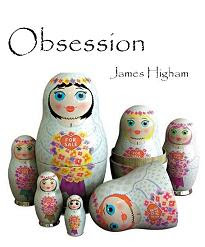 Obsession was the first in my trilogy of four books, loosely termed 'romantic thrillers' and the most problematic, as it was started 12 years ago and was heavily based on my first three years over here.

The others, based in , and , were easier to write because they were more fictional. Obsession was less literary and more factual although the facts had all been scrambled and the main character named Hugh.

Many of the dialogues were real, including the following and I've just been remembering the episode and having a good chuckle. Here Hugh and a young lady slip away to the forest from a giant feast at a country resort. That was really her name too:
"All right – so what was next, he asked himself and she possibly did too. They could go into the forest – yes, they could do that – but it was ultra-dark, with the half moon behind the clouds; plus it was cold.

He suggested it but she shook her head - stupid idea anyway, he reflected and then she surprised him. ‘I’m frightened of the forest.’

‘You – frightened? But you’re a Russian!’

‘Why can’t Russians be frightened?’

‘There are wolves in that forest, Hugh.’

‘Really? I thought they’d killed them all or driven them away or something.’

She shook her head. ‘My grandmother told me about them.’

He looked at her sharply. This was a woman in her late twenties who’d surely seen life and here she was speaking of grandmothers and wolves.

She dropped her eyes and chuckled but still held his hand. By now they'd reached the end of the approach road. ‘Do you think we should walk back? The others might be waiting for us.’

‘How can you be cold? You’re Russian.’

‘I’m human. You have some strange ideas about us.’

She snaked her arm through his and he was surprised again – it was something Anya had never done. He liked the feel of her long, thin, gloved fingers clutching his upper arm and wished he had a tadge more muscle to impress her, thick coat or no thick coat.

‘Stay here. I’ll find out,’ he ordered. ‘Hold on tight to the lamp post, Alla, malyenkaya. They’ll never touch you if you do that.’

He plunged into the forest, rambled about for a while, then came back to her. ‘Nope, no wolves whatsoever.’

She visibly relaxed and as they sauntered back, she asked what things frightened him.

‘Boring a girl like you so she doesn’t want to stay with me.’

‘No, be serious. What frightens you?’

She didn’t know what to say to that so wisely, she didn’t."