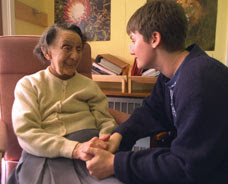 My best friend over here would not appreciate me writing of his elderly mother and her difficulties but let's say the issue is constantly on the mind. This is exacerbated by having lost two parents and a step-parent myself [the latter recently].

The elderly and the toddler are two issues which make it very difficult to be completely non-Statist. Do we run a near-totally free system like 's with sub-standard treatment except at the pay clinics or do we go the whole hog the other way:

The has many advantages to offer the newcomer, but a stable, affordable health care system is not one of them. The phrase health care crisis is perhaps too mild. Costs are skyrocketing, lawsuits proliferating. Special interest groups aggravate the problems. Racism, poverty, drug abuse and AIDS make matters worse. Significant portions of the population can no longer afford adequate health insurance. As a result, to get good health care in the you have to know what you're doing.

is halfway. The running down and dismantling of the NHS by Labour and the previous government has caused the finger to be pointed in different directions:

The near-withdrawal of the NHS in many areas from paying for elderly people who need health and medical care was revealed by the charity Age Concern. It follows years of controversy over the reluctance of health chiefs to pay for people who need high levels of medical and nursing care but who live in care homes rather than in hospitals. [Daily Mail]

The Eastern Daily Press has highlighted four heartbreaking cases this week of pensioners going blind, being forced to pay privately for injections to slow the progress of age-related macular degeneration.[Ellee Seymour]

Free and available to all is not possible and everyone in Health provision knows that … The blood sucking greedy Doctors . God I detest them , they prattle on about problems when you can see their Ferrari parked outside a run down Surgery.[ newmania]

… But if the NHS wasn’t willing to pay the prices set by the BMA & RCS (a monopoly) or if we had more surgeons & specialists, prices would have to come-down. Their price-fixing would be classed illegal by the Monopolies Commission in any other field: whether the Oil industry or Microsoft or Utilities … [Quasar9]

NHS hospitals will have no option but to invest in marketing tactics, such as advertising, if they are to survive against private firms who will already have large marketing budgets and considerable expertise in selling themselves. [BMA]

I personally feel that the state's resources, such as they are, should cover all health care costs for the elderly and babies, should cover defence and should partly subsidize free choice education and start-up businesses.

This need not mean big government, quite the opposite, which in turn would reduce wastage and make government jobs more like hen's teeth.

As far as the elderly go, the coming grey majority will have an effect on policies towards them but by then it will be too late for today's elderly.