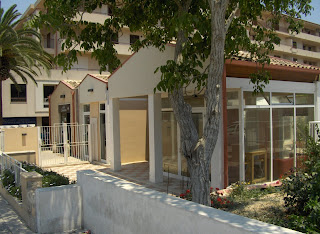 Under the olive trees today, the mind moved to L’Ombre in the south of France or wherever he happens to be at this moment. This post is dedicated to him.

The current heat in Sicily essentially means people are fleeing to either their country retreats or the beach [with the tourists] and ours is a bit of a ghost town really, especially during the hours of heat [10 a.m. to 7 p.m.].

For us, this means a sleep in until about 11 a.m., a few jobs, a bit of interfacing with the local population and then a wander along to a café for lunch. Today, Welshcakes went to Raffaele’s for her hair and I met her there.

Let me describe the place.

Welshcakes reaches the ante-garden patio, with its raffia table and low chairs, by lift, the marble stairway being too steep and slippery but it’s a delight nonetheless with its foliage either side. Once inside the main airconditioned room with its canvass awnings over the outside balcony, one is brought water or coffee and the coiffuring of and by the females goes ahead.

Afterwards, we take the road down along the dry stone walls, past the roundabout with its "umbrellered" beer garden and into the steep but picturesque drop down to our destination, the Caffè Consorzio, perched on a hill near the main route down to Modica Bassa.

Inside this caffè, itself on different levels, we go through one garden, past another and eventually come out on an olive tree shrouded stone terrace with table and chairs, delightfully cool and inviting. The girl comes out and puts another table beside it, covers it with a white linen table cloth and brings linen napkins and other paraphernalia.

The bread and drinks are brought and we order.

A breeze plays through the olive leaves and many float down and cover us whilst we wait. The food arrives and the service is courteous to a fault – meat, aubergines, onions, greens, tomatoes and so on, with copious liquid to help it along.

It might be climbing to 40 degrees outside this grove but it is refreshing where we are and tranquil – oh so tranquil.

Eventually we start the trek back up to our place, no direct route but a series of interconnected upward tracks, each with its own charm. At the steepest points, the Higham arm is taken and we do make it back for an extended siesta in the wood-shuttered coolness, followed by the grabbing of the Mac now and the writing of this post.

The “easiness” of the day, the lack of fuss, has been hard to put into words but it was nice for all that. 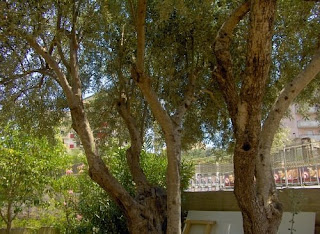